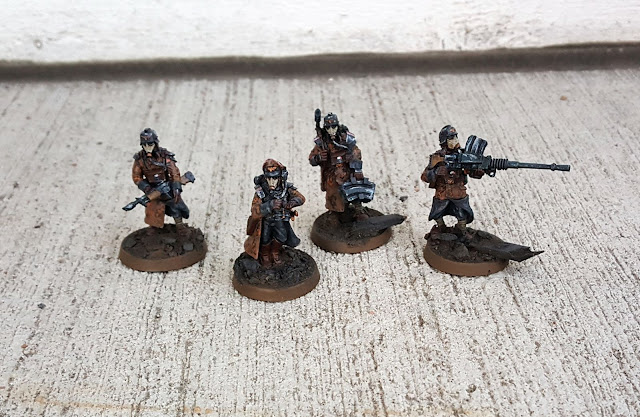 In our latest game in the “The Reconquest of Sertoria Comitus” campaign ( http://kampgruppe-engel.blogspot.se/2018/04/sertoria-comitus-game-2.html ) my Tank commander fell casualty. But after the game we rolled a wounded result, he and his crew had managed to survive the destruction of their tank. So in our next game I needed them on foot…
And therefore I had to convert and paint up a dismounted tank crew.

The whole campaign can be fount at:http://kampgruppe-engel.blogspot.se/search/label/The%20Reconquest%20of%20the%20Sertoria%20Comitius%20campaing

The gunner of the Leman Russ have taken the Heavy stubber from their tank and the loader is carrying extra ammo for the Heavy stubber. We have the driver with an lasgun and the tank officer is leading his men on foot from now on.

I painted pink markings on the crew to draw inspiration from german ww2 tankers. 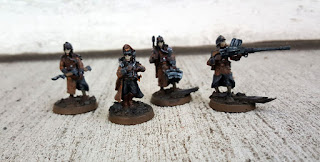 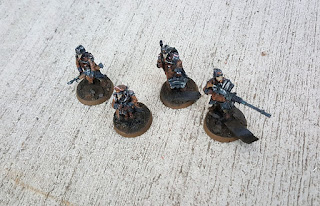 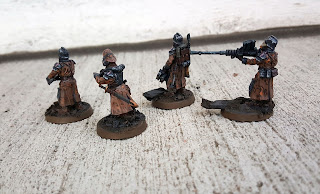 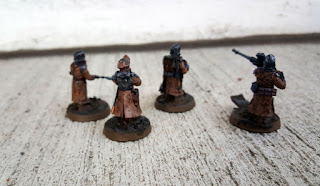 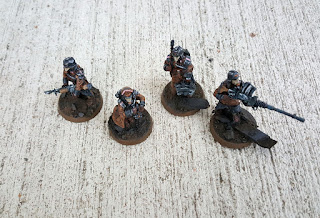 Rulewise I will use the rules for a Death Korps Field Officer but only able to give tank orders to tanks and his dismounted tank crew instead of the standard Orders for infantry officers. The crew will count as a three man strong Command Sections with lasguns, the gunner have been given an Heavy stubber using the cost from Grenadiers. 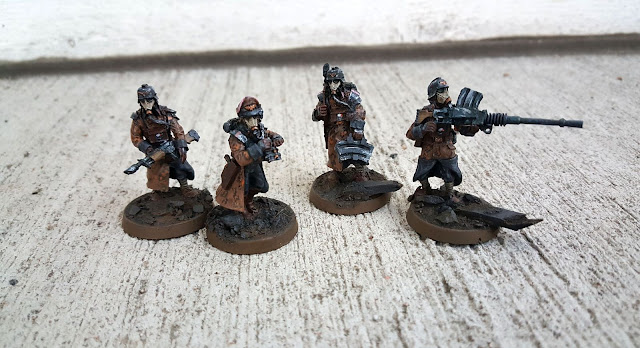 The Tank Commander Janusch Blitzen is a conversion, I used the topcap from and Cadian tank commander, pressmoulded the torso in greenstuff, used regular tank commander arms, the sword is from Fireforge games and the legs and the coat is from an Victrix French Napoleonic officer.

Only fitting to have some French parts to infuse some of the French spirit of always attack, in the miniature.
A truly unique miniature, just fitting as my (current) main character in our campaign. 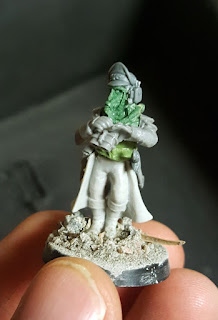