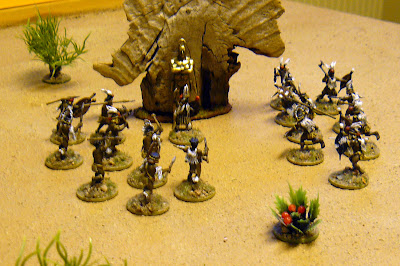 The Zulu tribe had been celebrating some religious festivity for three days and nights now and the Hamer tribe was feed up with their constant noise. It was time to silence the noise and topple over their false God (a key ring of the phantom)

The Zulu tribe consisted of a chieftain and four small units of Zulus.

The Zulu player could choose two of his units to be deployed on the table and the other two units would be placed in reserve. From turn three and onwards the player had to roll a 5+ on a d6 to get a unit from the reserves, two dices on turn 4 and three on turn 5 and so on. The unit from the reserve would then be entering completely randomly by a dice roll.

The Hamer tribe would consist of a chieftain and 3 units of warriors and the village hero Bobobo accompanied by his drummers.

A witchdoctor would also help out. She could be placed with a unit and giving that unit the fanatic and the wild fighter rules and give an extra attack like a commander.

The Hamer tribe would be divided into two forces and deployed randomly.
To turn over the false God a unit had to be in base contact with it and roll a 4+.

It could be best to say that I think we did some mistakes according to the rules so bear with me on those. Im not sure you could order a unit whiles being in hand to hand combat and so on. 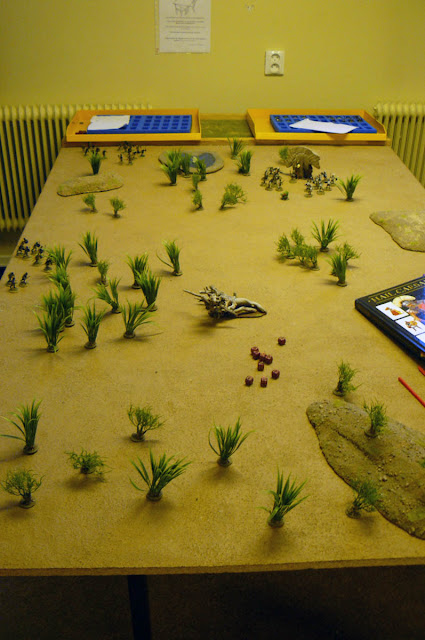 After following that dreadful noise for some time the Hamer tribe had located the source of it, it was time to silence it…

It started rather bad for the Hamer warriors and only half of their warriors could understand was the chieftain was yelling, it must have been because of all the noise.

The Zulus now realized the threat and formed a battle line. 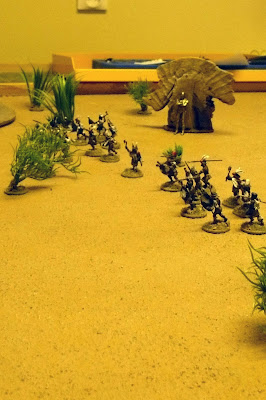 A group of Hamer warriors tried to sneak past the Zulus on the other side of the small lake something the mighty Zulus could not tolerate.

One young group of warriors was sent out to tackle that problem and a bloody hand to hand combat was to follow.

The Hamer tribe was pushed back and the two Chieftains clashed. Meanwhile another unit of Hamer warriors advanced and starts throwing spears on the unit guarding the totem.

The first Hamer unit and their chieftain is totally annihilated and the Zulu warriors swing around the flank of the next Hamer unit. 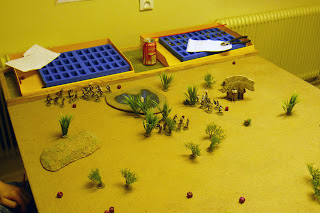 Bobobo takes the role of the new chieftain and tries to redress the situation.

The Witchdoctor is cut down with that unit and here promises of immortality and a easy win (her special rules…) seems to have been a lie.

The two tribes consolidate their positions and one Zulu unit takes a new defensive positions in front of the golden God.

The Hamer tribe sense that Zulu reinforcement is closing in and bring forth a fresh unit to try to throw spears at the wounded Zulus.

Bobobo seems to rather talk of how great he is and the unit fails to understand how that could be meant as a order and stands still.

The Zulu reinforcement closes in from the wrong side of the table edge, both units arrived from totally the opposite table edge. The bloodied unit that had conquered all before them continued with what they did best and trashed another Hamer unit.

Bobobo thought he had to settle this personally and ordered his drummer boys to follow him into a fight only to notice that they seemed to totally miss that order and was standing still and drumming for all that they were worth.

The Zulus could now charge Bobobo and his drummer boys and after a quick fight it was all over.
The celebration of the golden Phantom could continue. 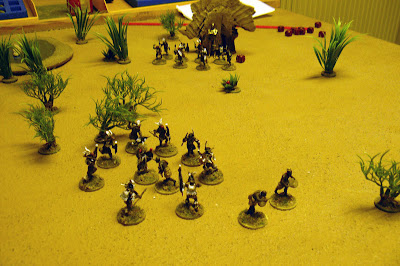 Well sort of anyhow, amongst many of my dad´s old scale models I found these that I took the custody of.

In 1:48 that could be used for 28mm ww2 games I found a Hetzer and the extremely cool Maultier Opel.

In 1:72 for 20mm modern games like Force on Force I found a Bell helicopter and a “flying Banana” and a Saab 105c 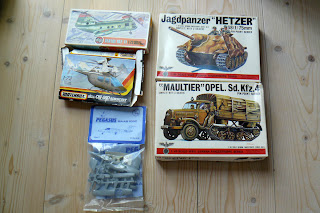 Its a good feeling taking the pictures of an full line of Napoleonic troops. 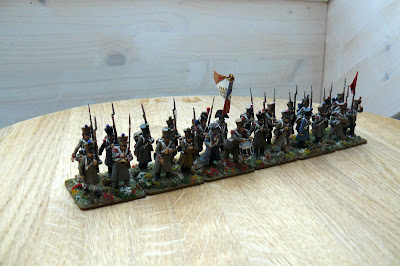 The painting always seems harder than any other era because of all the white ribbons and laces and what not.
So when you completed a new line you get a good feeling all warm and fuzzy.

I tried to make this line simple and gathered a mix of Perry and Victrix miniatures in long coats to speed up the process.
I skipped all highlighting bar the some details on the skin and on some of the white. I just let the devlar mud do the work.
I also tested with the bases but I think now that I went a little to far with all the flowers.
The banner comes from one of the Victrix boxes but with som highlighting with gold to make it shine extra nice.


Bad light meant that the pictures are somewhat blurry. Sorry for that.

I have no idea what that means but he seems to cry it all the time.
I found these old comics at a secondhand shop for like no money and thought maybe they could give me some inspiration for my African project.
Two of them are older then I am so its bound to be good...

While there I also found a small canoe that could have work as a 28mm French and Indian piece but as Im have not ventured into that I thought was best to leave it there.
Support you 2hand shop and buy terrain pieces there while doing a good thing.
at 7/14/2012 02:34:00 pm No comments:

I just finished some more of Gripping Beast excellent plastic hirdmen. Heavy armored and armed these boys are ready to go Viking.
Slowly slowly my hird is growing. 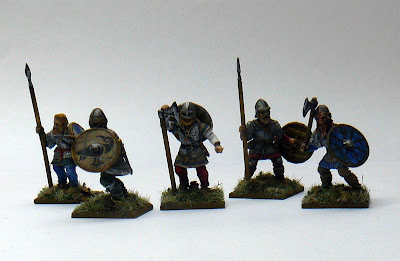 I mixed in some parts from the `not so good´ wargames factory Viking box, a head and some arms and shields to add some more variety.
The chainmail didn´t turn out that good, it could need a wash or so. The shadowing effect on the spears and axes does not look as I intended. But they will do, there’s plenty of other miniatures that screams for some paint.
Atleast some of the handpainted shield turned out good.
at 7/12/2012 03:28:00 pm 2 comments:

Here we got a small band of Wargames Factory Vikings painted up.Some armed bondi to defend the village against trolls and jötunns, well at least they could die trying. 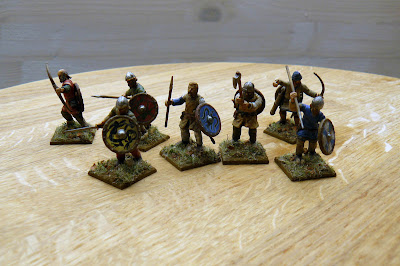 They got lots and lots of arms on the sprues but is lacking more useful stuff. I could have wanted more small bags and knifes and so on to put in their belts that could add some more options.

But the miniatures are better than most people seems to judge them. I would not go as far as saying they are great but would rather rate them as “not as bad as people say”.
And for that price they will make excellent rank fillers if nothing else.
at 7/05/2012 11:35:00 pm 1 comment:

Ahh yes. Some of the finer things in life.
Eating strawberries, watching the movie Waterloo and painting 28mm Napoleonic’s with some of the chaps at the gamingclub. 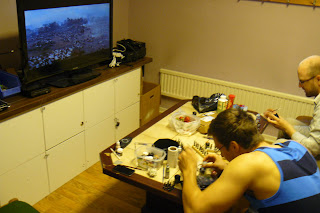 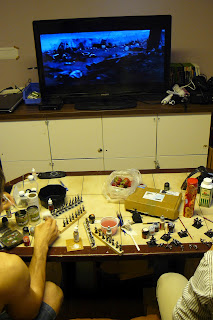