We had a large game of Lions Rampant this Saturday.


We played the Blood Bath scenario on three 24pts armies per side, and changed the Casualty number from 5 to 15 as we had three times the number of armies.

The Westerners wound be fielding two County of Tripoli forces and a Crusading German contingent.
The Saracens had one Seljuk Turkish army, one Egyptian and one army gathered from the vicinity of Damascus
We used activation cards, an idea I got from Michael “Dalauppror” and his “Håtunnaleken” games. This worked out really good and added another level of chaos to an battle in a really simple way.
Each army had a symbol on a card and was activated when their symbol was drawn, when all symbols where drawn the deck was reshuffled. This meant that you never know when it was your turn or who would be next. It also had the option of one player activated last and then first when the deck was reshuffled. A highly recommended way of playing that makes for a even funnier game.

I would be playing the Seljuk Turks in this game.

Maybe it will be best to point out now that we missed the 3” between units from opposing sides. Best to reread the rules before next game I think. We did some other misses also but nothing mayor. We all had a really good time and that’s what counts.

The Egyptians sent forth their trackers in the center and the light Turkomans from the Seljuk’s advances on the right flank.

The Damascus forces bide their time.

The Tripolitanian right flank advance with their heavy spear.

Overview of the Crusading lines. The Germans in the center flanked on both sides by the forces of County of Tripoli.

The Egyptians have taken an overviewing position on the hill.

The first Seljuk Turcomans closes in.

The force from Damascus have started moving, a mercenary crossbowmen unit have taken a position on the hill.

The County of Tripoli moves forward to counter the Seljuks, they take some damage from arrows but nothing major.

On the other side the forces from Tripoli also moves forward.

A small unit of bidowers tries to inflict some damage as they come. 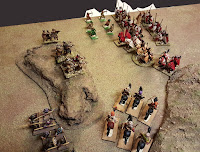 The Knights presses forward wanting to get into the action.

The Knights on the other flank continues to push the horsearchers back.

I have now moved the Turcoman scouts on top of a steep hill. (my only walking unit in this force… The Seljuk Turks are really mobile force.)
The horsearchers where moved far to the back, trying to get a greater distance to the knights.

With the impetuous knights on a rampage they wildly charges up the steep hill and into my scouts.

The Germans have advanced under a hail of arrows from the Egyptians and when they got close enough the Egyptian Mamluk units charged them. The combined effect of good shooting and close combat drives the Germans back.

Another charge of the Mamluks.

This pushes the German infantry even further back.

The Turcoman scout managed to use the heavy terrain to their advantage and the knights are driven back with casualties.

The Knights continues to hack their way… 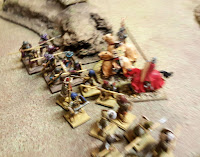 The County of Tripoli moves another unit of Knights forward…

The Germans have stabilized their lines.

More Germans moves forward between the hills and ridges.

The action continues and in the far back German knights can be seen moving forward.

The knight pushes into the javelin totting Bedouin light horse.

A unit of Turkish Ghulams counter charges the westerner’s knights.

The wild charging knights tries to climb the ridge with their horses and are drivven back with cassualties.

The Germans presses a keel of steel into the Saracens. 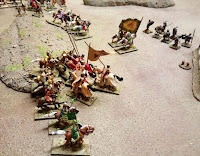 The Knights are lured onto the rocky hill.

And are driven back by the light horse, with their lighter horses and equipment their seemed to be much better at fighting in the rocky terrain.

The mercenary crossbowmen on the hill drives wave after wave of enemies back.

The German mounted crossbowmen drives a unit of Egyptian levies back.

The Leader of the host from Damascus is finally fed up with the knights and charges him.

With casualties mounting and forces drawing their breath, the al important hill is currently in no hands.

A unit of levies have formed an defensive schiltron awaiting enemies.

German knights moves out of the ravine. 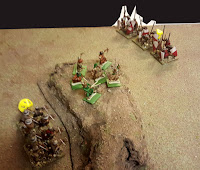 The Bidowers takes the hill. 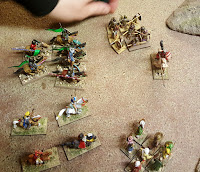 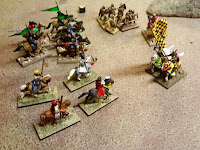 And here we had accumulated the 15 units of casualties of the scenario and the units were counted up reveling a victory for the Saracens.

Really big thanks for all involved.
And to all of you reading this I hope at least some of the pictures turned out good, I had forgotten my camera but the pictures from the phone takes good enough pictures it seems.