French and indian, Tomahawk and musket

I just got the latest Raid book from Osprey, Tomahawk and musket. 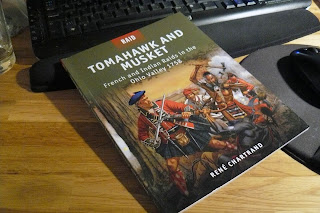 As I just got it I really cant give you more than my first impression about it.
I got it to give inspiration for scenarios to game and I think it will do that just perfect.
It seems to give some back story, some maps of battles or raids and you will get some uniform guides. It also seems to have more color pictures then the standard Osprey publications. 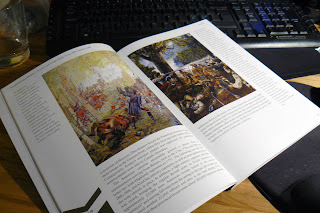 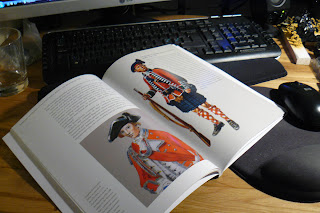 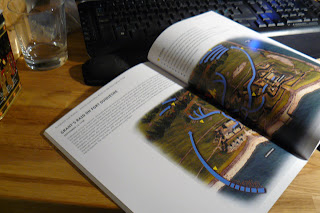 The Legend of Kyrandia - Malcolm

Since I first laid my eyes on this model I thought it would be perfect as Malcolm from the old computer games of Legend of Kyriandia that I played as a child. 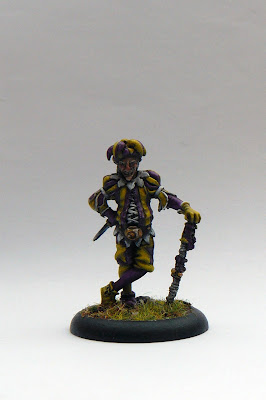 I just had to get him and paint him in yellow and purple.
It’s not meant to be a perfect copy of the original dress, more like an inspiration to my paint scheme. 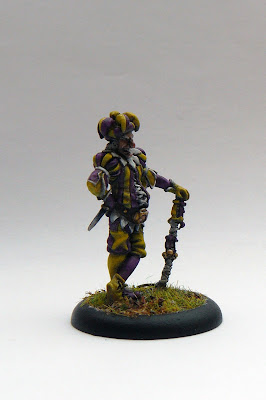 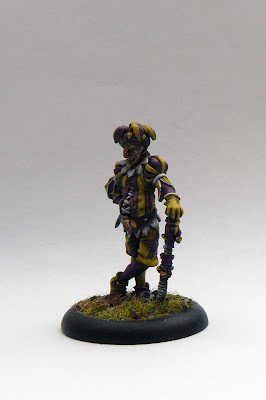 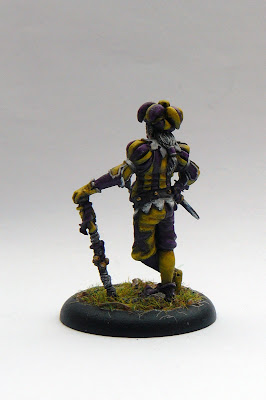 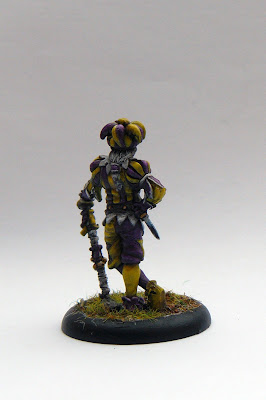 The model is “Omoklon, Twisted Jester” from Guild of harmony.

I got some more indians for my "French and Indian war"

Here in skirmish formation and with a chief. 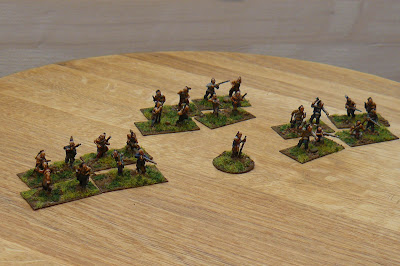 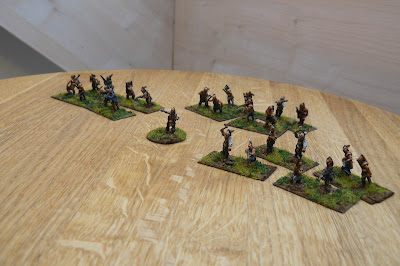 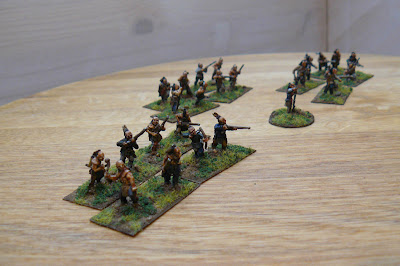 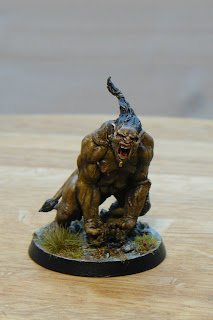 That is one angry troll.
The miniature is from Game Zone miniatures, but I added a tail in greenstuff. 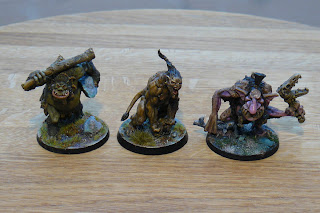 I got some more miniatures from my French and Indian war to show here.
Here I got some frontier militiamen. They could be used as either French or British I guess which make them useful in more games. 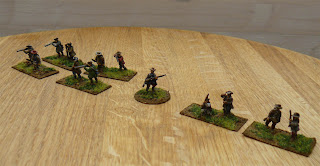 Here we have two small warbands of Indians and a chief according to my basing standard of the Last arguments of Kings supplement to the Black Powder rules.

The first post in my French and Indian War I wanted to show of my rather small force of British forces.

I intended to use the Black Powder rules. By switching all the ranges from inches to cm I found out that it worked rather nicely in 15mm. 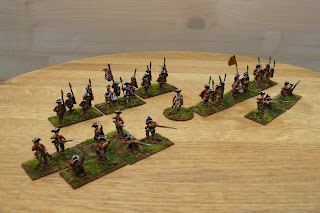 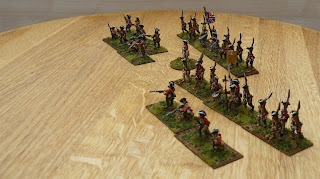 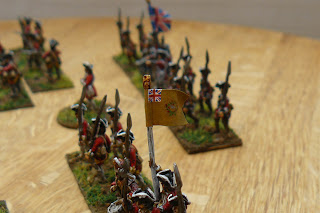 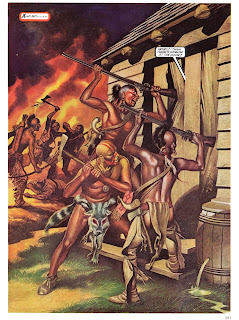 " The French and Indian War is the common American name for the war between Great Britain and France in North America from 1754 to 1763. In 1756, the war erupted into the world-wide conflict known as the Seven Years' War and thus came to be regarded as the North American theater of that war."


Ever since I saw the movie "The Last of the Mohicans" I have been somewhat interested in the French and Indian war. I think its an exciting era that’s offer a lot for a tabletop game.

You get it all, fancy uniforms colorful in all its glory, sneaky ambushes, grand linear battles, sieges and skirmishes.

The thing that really got me into this, the drop that spilled over the cup, so to speak, was when I saw Dalaupprors really nice Indians from his American war of independents project.
Do check them out.
http://dalauppror.blogspot.com/2011/03/battle-at-fort-st-john-september-1775.html
http://dalauppror.blogspot.com/2011/01/woodland-indians.html
When saw those I knew I had to get me some Indians…
I eventually dicided to go at 15mm as I thought it would be easier and quicker to paint.
And I bought a couple of miniatures from Blue Moon if I remember correctly.
This has been a (another…) sideproject for some time now but I think its time for them to be seen here from now on.
at 1/16/2012 12:57:00 pm 2 comments:

I bought this roadblock and pained it for my local game club. The pack is from Battlefront to their Flames of war game and is sculpted to 15mm. 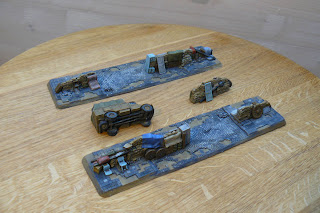 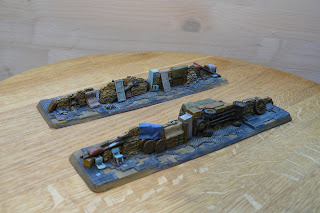 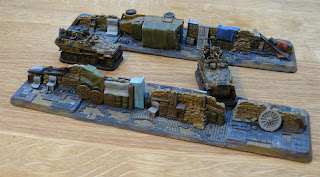 But If I lose the truck it could easily work for 20mm.
A nice terrain piece that I expect to get heavy involved on the tabletop games to come. 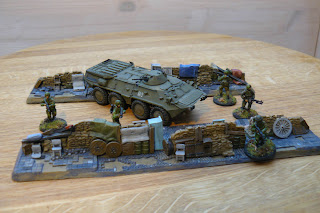 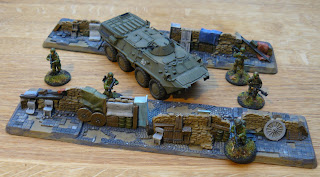 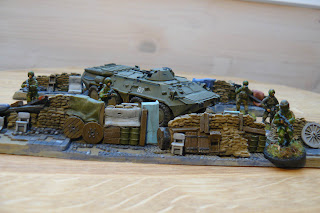 I have always loved the btr80, I think it’s such a beautiful vehicle and one of the reasons to painting all these Russians is so I can motivate myself to get me one. 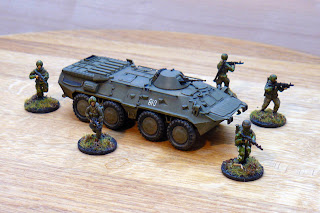 The model is a 1/72 kit from Trumpeter. A lovely kit and was really easy to assemble and it included real rubber tires.

I now regret that I just bought just one, I should have bought three…

I painted it in a neutral green color without camouflage so it could multitask to different tasks.
The green base color is Valejos 924 “Russian uniform WWII”
at 1/02/2012 07:12:00 pm No comments: