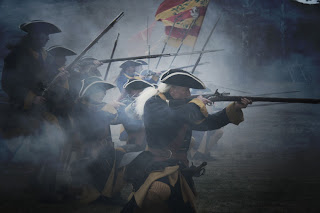 What would later be known as the Great Northern war had its background and the excuses to start a war many years before.
Carloeans, the most well known soldiers of at least the Swedish part of the Great Northern war made their name during this conflict. But they were formed before the war.
Charles XI (eleventh) (1660 –1697) quickly found out about poor shape of the Swedish army and navy early in his reign in the wars against Denmark. And something had to be done.  In 1682 the new army reform known as the allotment system was decided. The system would prove to be so effective that it would be used for 200 years.
Each counties or province would raise and supply a regiment, about 1000 or 1200 men in “good or bad time” A couple of farms (about four) was called a Rote and would have to equip a professional soldier, provide a croft (a small farm cottage), farmland and one volunteer soldier who then could make a military career. This meant that the rest of the men escaped the former use of forced conscription.
The regiment was made up of men from the same region and would have attended the same military drills and would then know each other and already be friends if the war would break out.
Each company had to report how long time it would take to be gathered and formed at the regimental gathering place. Many test mobilizations was conducted and detailed maps was drawn, roads for the mobilizations war improved and many gästgiveri gårdar was built (a kind of hostel were you could spend the night, get some food and change to a fresh rested horse).
Detailed plans were made and tested and after some years the King would have a peacetime force that could mobilize and be ready to be shipped out of the many military harbours within a very short time.
And the force would be a masterly drilled and a very disciplined force that with the belief in their own fighting force and king and country would be on the same level of combat will of the SS of the second world war, totaly brainwashed in a fanatical Lutheran indoctrination.
This would become very handy when his son Charles XII (twelfth) (1682 – 1718) was crowned king after his death and all of Swedish neighbors thought that the young and inexperienced king and a famine that had befallen Sweden would make her an easy picking and it was time to take back all the land Sweden had won in the wars of in 17th century.
Sweden blue-eyed believed the diplomats and “eternal friendship” reassured by Russia, the friendship agreement signed by Denmark and so on. Little would Sweden know of what would befall her in the years to come…
Oh and as a side note, thank God for Erik Dahlberg and his mistrust and his prearrangements in the parts of what was then eastern Sweden.

And with that little introduction written in a Swedish view of things I think it safe to show some of my Great Northern War stuff.
at 9/26/2011 09:45:00 pm