Trojan Support Vehicle for my Death Korps of Krieg, WIP


Here are some work in progress pictures of my two Trojan support vehicles for my Death Korps of Krieg.

I just love to have those support and engineering vehicles to my force.


I started with two second hand Chimeras in rather bad shape...
Lots of plasticard and different bits.

After the rough shape was built I added rivets, from an discarder water filter. A drop of plastic glue and tweezers.

After this it was time to add extra ammunition and extra gear.

Here are some pictures from late this night, I could have added so much more bits to these but I got to many projects and had to call it a day.

After a black primer 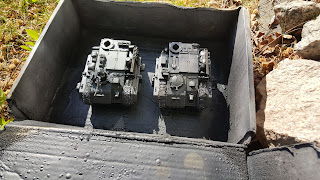 After a brown primer, I sprayed from a angle and left some parts at the bottom unpainted as I wanted the black to darkened it down for me, a sort of quick zenith lights with black and brown primers.

And now I can start paint these babies. I will give these my regular camo pattern and the white markings as my other tanks. I have thought about adding a mascot like a pin-up or something in freehand but with the amount of things on these vehicles it could be a little to much.


In the future I would love to field a whole armoured company or an artillery company with all the support.
Something along the lines of these... 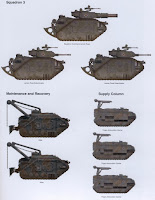