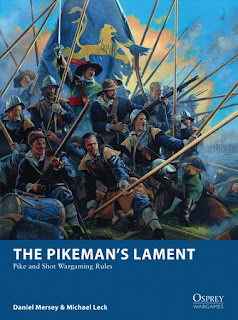 I recently got hold on the rules of The Pikeman´s Lament and have just started to flick through the pages. This post is not meant to be a review so I will not go into details. I can just say that if you like the Lion Rampant rules you will not be disappointed.

When I first heard about the rules my initial thoughts were that this could be the excuse to get that force of Polish Hussars in 28mm with feathers and all that all wargamers dreams about...
I now realise (atleast now when I write this here...) that I have more project then I need so I have done an small inventory of some projects I already have in 15mm that could be translated to The Pikeman´s Lament.

But with that said, its not impossible that I just might start an 28mm project. I have always wanted to do 30years war but never took that step.


First out in fitting miniatures to reuse in Pikeman´s Lament is from my 15mm Great Northern War.
The miniatures here are initially painted up for Gå På but I never got enough painted to play the game with my miniatures.

Here under we have an Danish force of

I got some Swedes painted up but not enough or not right configuration for this set of rules, but I got loads of unpainted miniatures left so that could be a future project to fix up.

Next I got is my 15mm French and Indian war project. The project was initially planed for Black Powder and I played some nice games with them.

I didnt have enough painted up to field an French force in The Pikeman´s Lament so that would be a nice future project.

But for the British I could come up with this:
Much more skirmishers then I would like but it is doable. 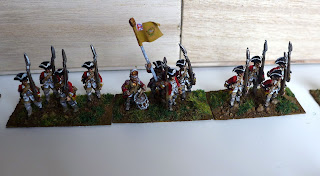 So there you got two future project I just might reboot with these rules. Nice to already have lots of miniatures just waiting to get some paint, stuck away in a drawer...
at 2/08/2017 09:40:00 pm