To continuing on my Medieval Scandinavian project I felt that I needed a proper commander. I have long had an idea about some bits that I wanted to use, a Warhammer Bretonian falcon I got from a friend and one of those old Warhammer barded horses head...

So started to convert. The main miniatures and bits are from Fireforge Games. I added an Perry miniature War of the Roses horse (https://www.perry-miniatures.com/product_info.php?cPath=22_63&products_id=2756&osCsid=sd5r72cd5vueckbcbbiouidhc1) as I was short on horses, a little to modern I guess but thats for button counters to decide.
I gave the standard bearer a Viking head from Gripping Beast, I think its only fitting to show their Norse ancestry.
The commander, Ebbe Sunesen was given an extra saex also from Gripping Beast and a falcon from Warhammer Bretonnia but is mostly Fireforge bits. The hand holding the falcon is huge but I painted it as a leather glove to try to make it more believable. 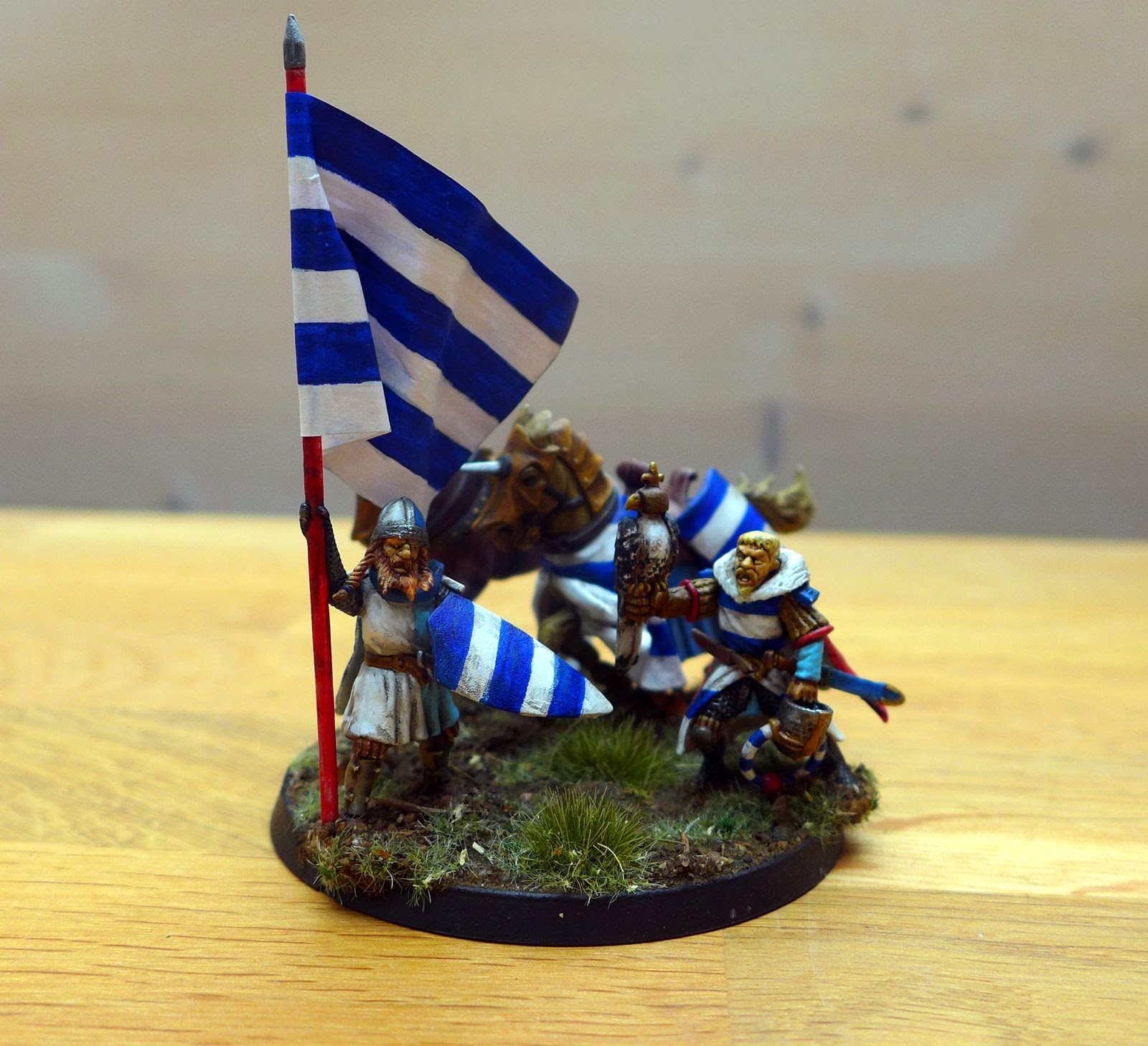 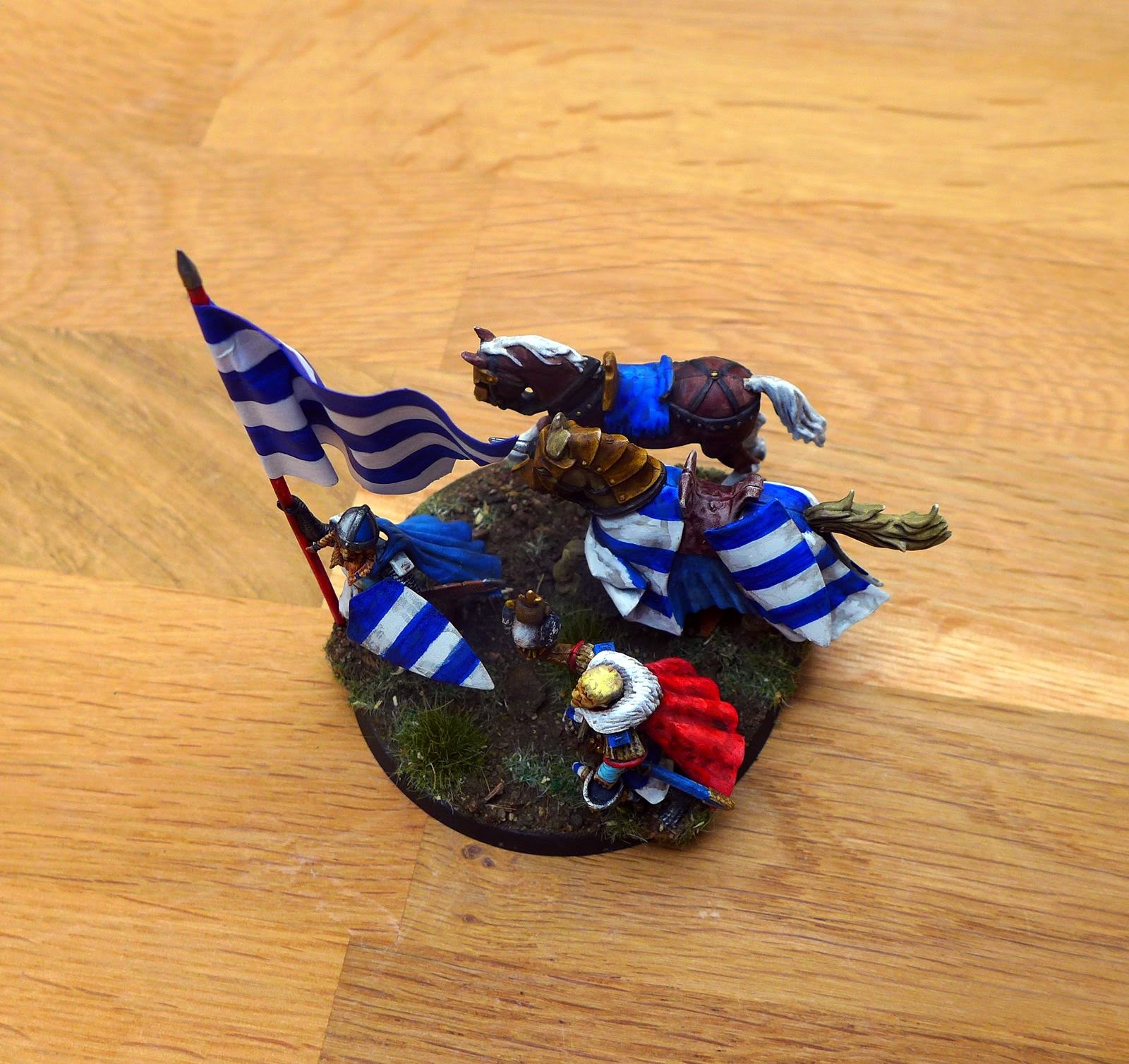 About that Warhammer horse head, I dont know why I really wanted it. Sentimental issues I guess but I really wanted to try it out. It is a little oversize and the armour is so wrong for early medieval but by painting it as leather I think I made it at least somewhat believable.

Painting wise I went for the house of Hvide a Danish noble family that was very powerful. http://en.wikipedia.org/wiki/Hvide

But painting a Danish in blue felt really really wrong so I added some extra red to compensate. But I guess with having Swedish troops carrying the colours of Folke Jarl Birgerson in red (http://kampgruppe-engel.blogspot.se/2013/10/medieval-infantry-of-folke-jarl.html)  this would happen.
This of course complicated my initial idea of having a blue and a red army battling it out from when I first thought about this project.


I thought about carving the reins on the horses and giving it to the banner bearer to hold by converting something but I decided that this is probably just a thing people would notice if they really looked closer on the models, not a thing people would think about on the gaming table.
Besides I got tons of other miniatures crying and waiting to get their attention. Its a long line of miniatures all the way from the top of the leadmountain to my painting table... 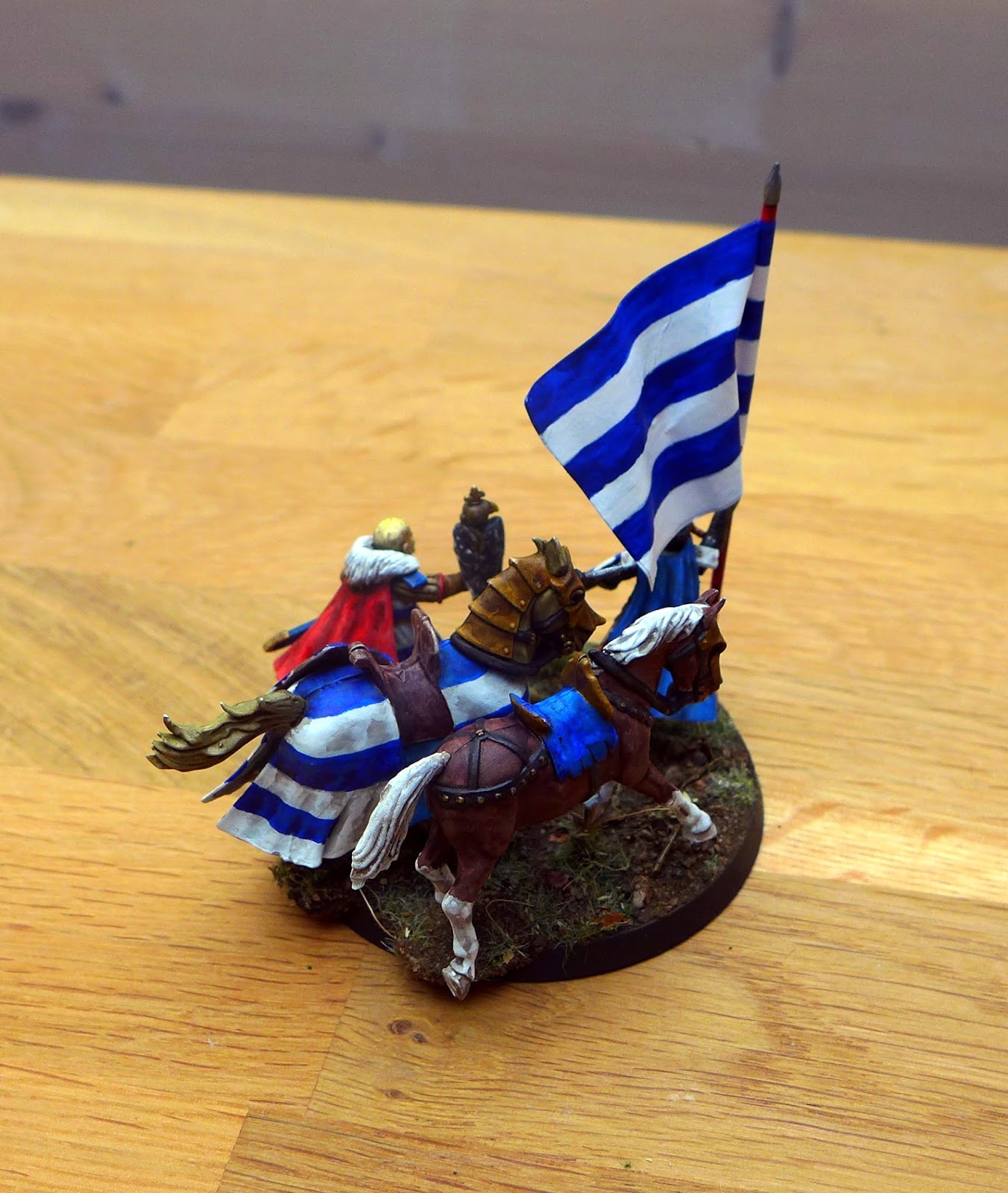 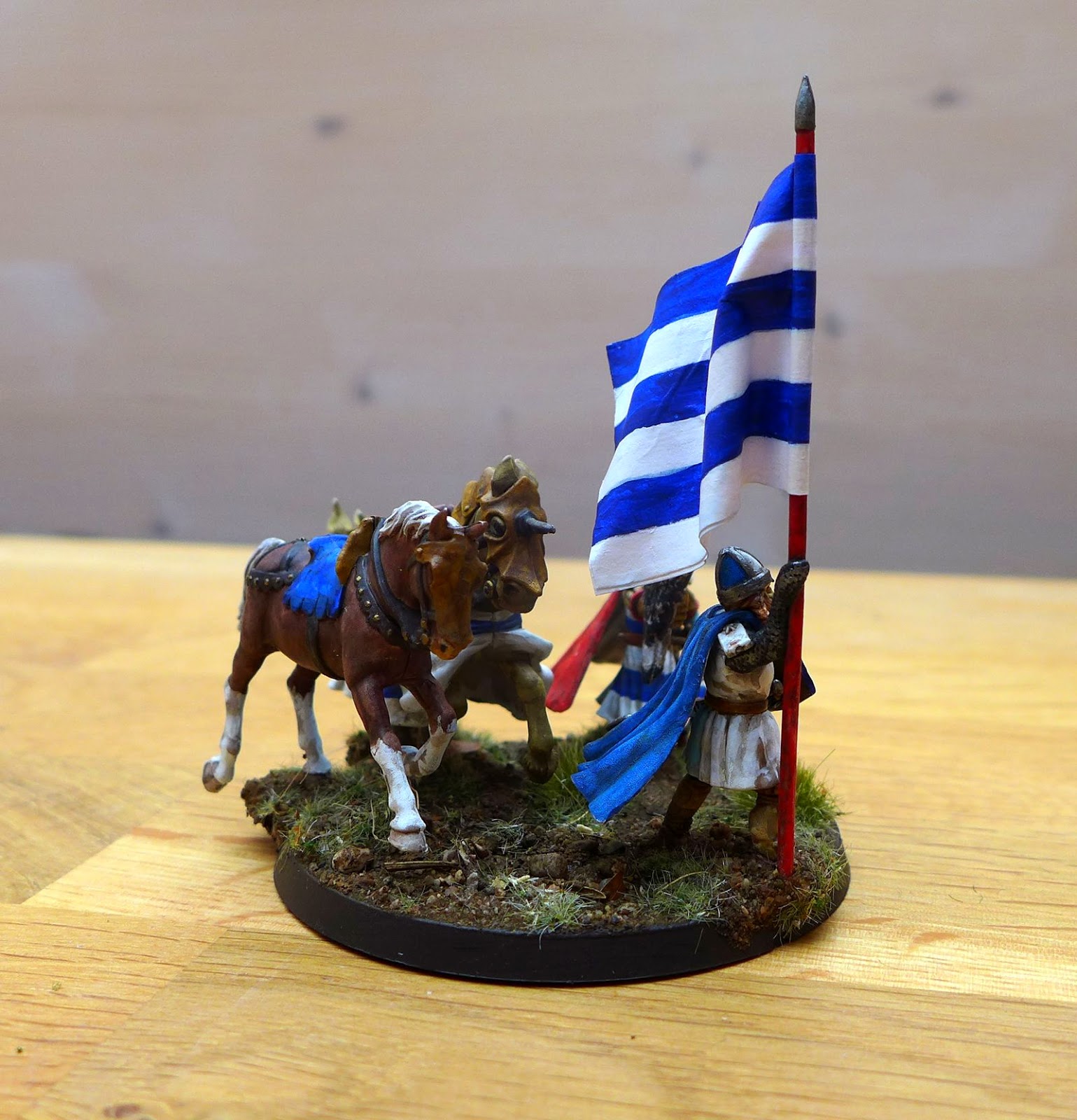 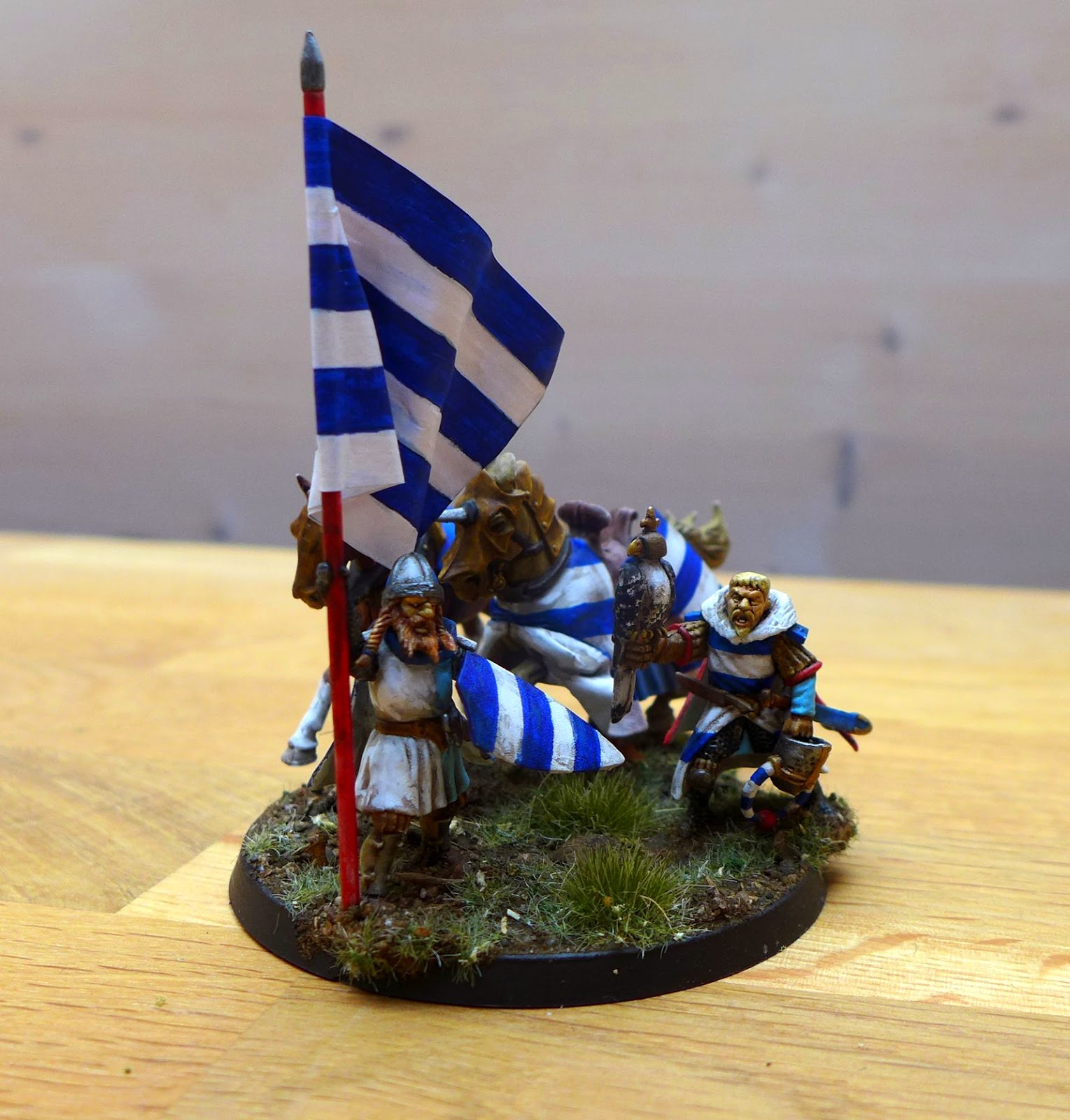 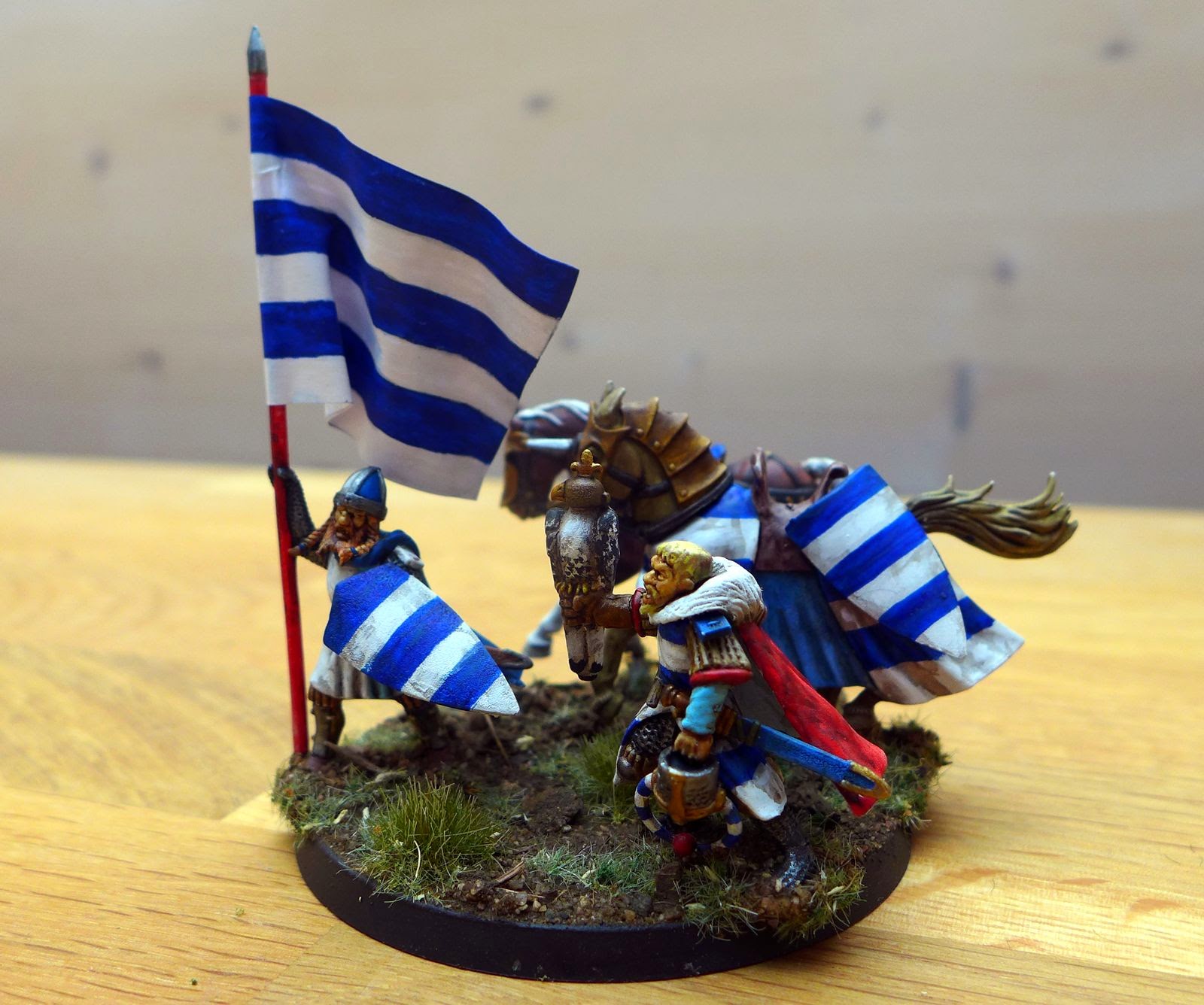 Ebbe Sunesen was a member of the Hvide family as I mentioned.
He died at the battle of Lena 1208
Where the Swedish Kings Sverker aided by Danish troops was defeated by Erik Knutsson aided by Norweigan troops.
http://en.wikipedia.org/wiki/Battle_of_Lena

The Battle of Lena can be seen in the Arn movie. Its a fictional story with some fictional persons and so on but I think they got the movieprops rather good.

In the move the fictional carracter Arn is mortally wounded by Ebbe Sunesen excellent played by Jakob Cedergren http://en.wikipedia.org/wiki/Jakob_Cedergren Hurray...
The Coat of arms are so wrong in that movie but never mind, I cant really be picky Im glad that there are any movies at all on this.


Ebbe Sunesen was the father in law from King Sverkers first marriage with Benedicta Ebbesdotter , it is believed that she died of childbirth 1200.
http://en.wikipedia.org/wiki/Benedicta_Ebbesdotter_of_Hvide

This is just a small show of how complicated and intervening the Scandinavian Medieval times and the the ruling families are to each other.

And as a background for a miniature game this is just perfect... I can paint all kinds of miniatures in whatever colours I like and then divide the forces as I like and it will still probably be historical correct for one of the conflicts during this time and place.

Here are some pictures of the Coat of arms of the Hvide family. 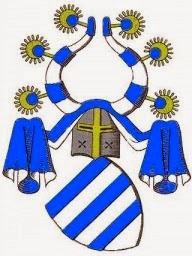 And for further images I highly recommend the excellent site: http://krigsspil.dk/download/download_9.html  but I think they got the Coat of arms for King Sverker wrong. But more on that and why I think so in a later post.