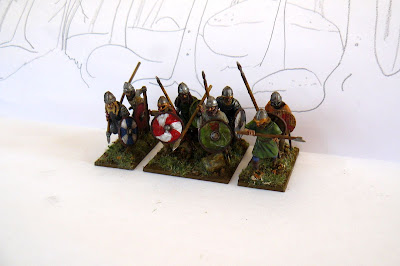 These Guests warriors are made from a kitbashing of Conquest Games Norman Infantry and with Gripping Beast plastic heads with some extra bits from elsewhere. For unpainted pictures of the actual kitbashing look here: http://kampgruppe-engel.blogspot.se/2013/03/norsemen-kitbashing.html 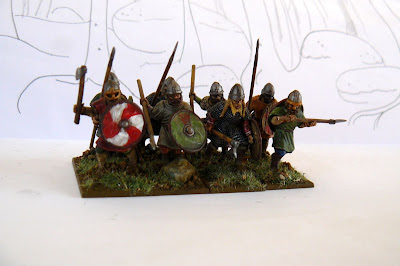 These are the first test miniatures but I like them so I think I will create some more later on.


My sources on Gestirs are somewhat lacking at the moment and I would need some more.

* They did apparently only receive half the pay of an actual Hirdman.

* A group of low born professional warriors. Historically they acted as a kind of police force, doing errands for the king, executing his justice and collecting his taxes.

As Im somewhat lazy at the moment I did a quick google-translate on some Swedish text I found and fixed the most obvious errors, hope you understand the content of it at least.

* The Hirds second class, the so-called guests, officiated at the outer watch keeping, did reconnaissance in war and the Kings commandments everywhere in the country. At the king's farm/castle they had special shelter and tables set aside for them, and in the leiðangr their own ships. Inclusion in the visitors' class was done with less solemnity than in the actual court-men, but also where required class members agree on a new member's entry.

So how am I to use them on the table top ?
Im not totally sure just yet.
Statwise I would rate them somewhere in between an Hirdman and a Bondi. But are they bad Hirdmens or are they good Bondi troops?
Maybe they should be given some special rules to represent their reconnaissance ability.

In the Hail Caesar rules maybe they should be rated as Bondi troops with the special rules of Marauder, and maybe with Tough fighter and/or Stubborn.