10000 hits
Thats someting to celibrate, but Im not sure how?

A good wine and good food with the girlfriend seems wrong. Im guessing she should just look funny at me for even mention it so thats not the way.


I just looked at the counter and it was full of nines so I just tricked my budy Jonathan to check out one thing at my blog...

Thanks for all the feedback and all the inspiration you have given me.
Maybe get something special to paint, that could be in order?

My Jätte as we say now a days, or Jötunn as they were known back when the stories and legends where much more alive.


I had this model half painted at my table for maybey half a year, it was time to finnish the other half of him.
The skintones on the backside of his elbows arn´t perfect by any means but he will do.

A really fun miniatures. A old sculpt and I dont´n know who original sculpted him but he was labeled eM-4 where I bought him.
There is something special with these oldschool models. Full of character.

I went with red hair but with a tuch of gray. The pictures dosn´t give the metals on his spiked club justice unfortunetly. 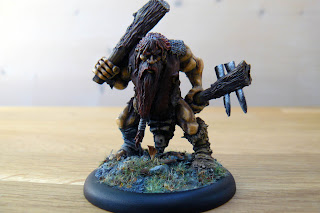 I have now finished a small British Heavy Armoured Squadron for Flames of war.
Is it a good one? Probably not but it’s cool, that’s what’s matter.

If I later want to expand this small list Im open for some different ideas. I could add Bofors AA guns that in the combination with my infantry hold one objective while the rest of the force attacks.

Some artillery or smoke would be nice, maybe add some 25 pounders or aircrafts.

Or I could go all in for a offensive option adding Crusaders or Honeys and maybe some more Universal carrier, taking the fighting to the enemy.

But the small 1000pts list that I had planed is now finished.

1x Command Rifle/MG, 6x Rifle/MG, 145pts
(Pay points for a Field Platoon, Royal Engineers and truck and switch it for a Rifle platoon)

I just finished the bases on these little loveliness´. A small scouting force filled with MGs. The Universal Carrier is such a nice addition to my British force.

Modeles and extra crewmembers from spare 25pounder crew I got lying around, all from Battlefront.
Oh and Alex, if you read this. The Infantry bases are fixed. Thanks.
at 5/23/2012 05:00:00 pm No comments:

I always had a soft spot for the Grant tank. With two guns it resembles the land-battleships if the periods between the wars. I just love the design.

And when Maelstrom had their 30% spring cleaning sales I couldn´t resist it any more.
I ordered some “Forged in battle” Grants.

And that’s the reason my old infantry finally got some paint on them.

I bought two packages of Grants which gave me eight tanks, that’s a Commander, 2 in command and two heavy armoured platoons. 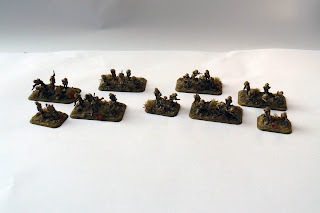 These boys have been camping in my leadpile for a long long time, It must be at least 5-6 years.
Its nice to finnaly give them some loving.
British infantry for the desert war. There is something special in going to battle in shorts…

I see know on the pictures I have been rather sloppy on the flashes or "casting beard" as we Swedes like to call it, particular on the helmets. But at least they were rather quick to paint and the end product is nice.

Some late reinforcement to my medieval French. Knights, crossbowmen and some farmers with pointy sticks.
The miniatures are from Mirliton. 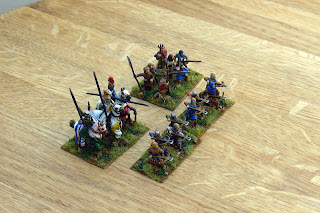 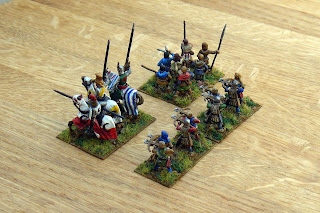 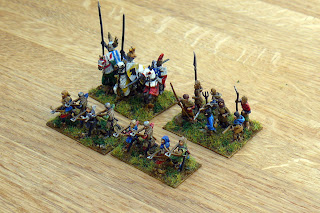 Can’t se the wood for all the jungle trees… 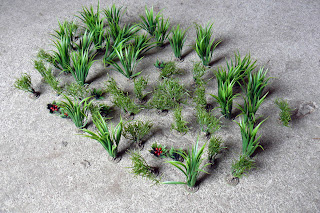 62 bases all in all. And they where rather easy to do.

I found the jungle pieces one day at a garden shop vile I was looking for a flower to my mother but couldn’t resist to get me some toys to. And after I used my hobby knife to cut the ball of plastic plants down single pieces I used my newfound love, the glue gun…

With the glue gun I attached all the small jungle pieces on to round bases from Renadra.
http://www.northstarfigures.com/prod.php?prod=2457

I like there low profile and they will not steal the attention from the plants itself.
After that I used my older love, my wood glue and regular sand shamelessly stolen from a playground.

And there you have it, no painting no nothing. Just glue all the pieces together. 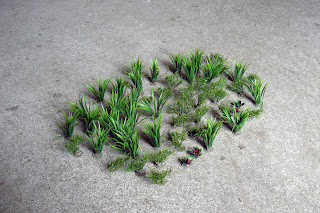