I feel satisfied with the glueing and the greenstuff work on these French knights. These will be nice to field once all painted.

I have given some horses extra chainmail or clothed barding, the dark metal I think will look nice contrast against the bright colours I have planed.

As a sort of tribute to my first knights I have integrated some old Bretonnia bits into this unit.

I wasnt happy with the pictures of the French Crusader crossbowmen and as it wasnt raining when I was home on my lunch hour I took some new pictures on the miniatures.


Im mutch more happy with these, it really shows what light does to the pictures. Even when these pictures are taken with the phone they are mutch better. 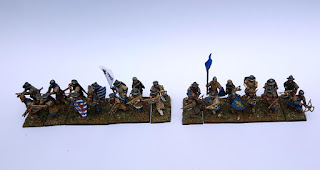 Edit: Better pictures of this unit can now be found in the post above (kampgruppe-engel.blogspot.se/2016/05/new-pictures-for-french-crusader.html) 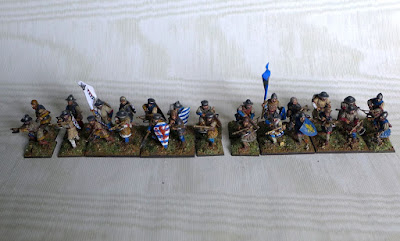 I have for some time now thought about getting some French soldiers for the crusader era. Here are are the start of such an force.

For the start I painted two units of crossbowmen in Lions Rampant terms or one standard sized unit and one small sized in Hail Caesar. The are actually two miniatures to much in this batch but thats because I was missing two miniature in an earlier painted unit.

I went with one unit carrying a rather generic "French" colours of blue with a yellow "French lilly" , the other unit is carrying the colours of the House of Lusignan, http://wappenwiki.org/index.php/House_of_Lusignan and which happen to look similar in style to the House of Hvite, http://kampgruppe-engel.blogspot.se/2014/11/ebbe-sunesen-hvide-af-knardrup.html from my Medieval Scandinavian project making it easy for these to have more then one use.


Sorry for the bad pictures, its not easy balancing my small son in one arm keeping him from arms reach of the miniatures and the camera in the other combined with the lousy weather and sunlight. 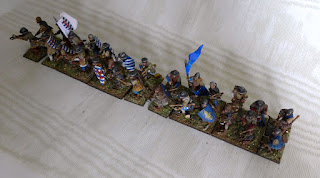 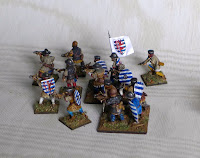 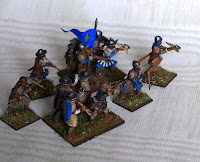 Edit: Here are some more pictures I took with the phone. 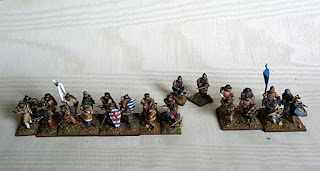