Yesterday I got this little letter saying I got an box to get at the ”postal office”. I put the daughter in the stroller and of we goo. 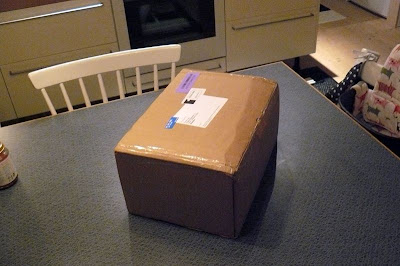 The plan was to fill up on the old lead and plastic pile, it could be a long and hard winter. Better bunker up.
The big box and is content is divided into three main projects. 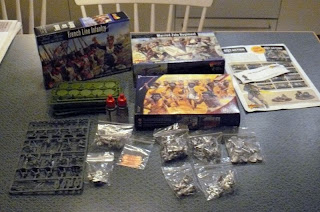 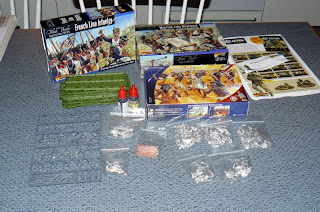 For my Napoleonics I got:
A box of French Line Infantry. I wanted to test out the new Warlord box and ad even more variety to my Frenchies.
Vivandiere - The Soldier's Comfort. Could be a fun model to paint, a little different.

For my Vikings I got:
Harald Steptoesson, special edition Viking. How could I not want to add this model to my Viking collection.
A plastic frame of Warlords Celtic Warriors, to make berserker conversions mixing with Gripping beast plastic Vikings.

For my Tribal Africa project, the largest lot in the box.
For a new tribe I got the Kushites from Warlords, allies to the Persians or could be used on their own. Im not that picky about what year my Tribal African project is so I will mix heavily on miniatures I like. Besides its all spears and shield in the end, so theoretically my inhabitants in this project could have meet a tribe looking like this.
For the Kushites I got:
Kushite King and Chieftains, Kushite Command, Kushite Spearmen regiment, Kushite Archers and if my numbers are correct that should give me enough for 2 small spearmen units and a small archers units and lots of fun characters to use in Hail Caesar.
I got an box of Married Zulu Regiment, wanting to expand on my Zulus as the Unmarried box I got at home was so good.
I got and box of Perrys plastic Mahdist Ansar, it’s a nice box for this project and I wanted to try to add my numbers of tribals but also wanted to try to convert some trackers or skirmishers.

And a box wirespears and some more round bases. 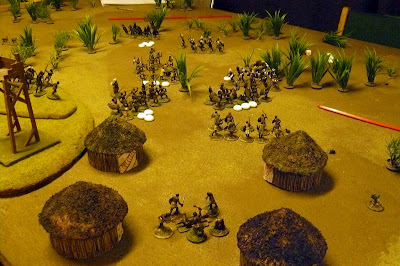 Yesterday Peter and I had another game in Tribal Africa.

The setup was that the Gamo tribe had invited the neighboring Bushongo Cannibal tribe for a fiest and some good music with dancing. Some might think that it would not be the best idea to invite them over for dinner but it’s a small gesture to try to keep calmness in the neighborhood.

The Zulu tribe got angry because they weren’t invited, they got angry and with the help the grumpy old Death cult living in the area they decided to crash the party.

The attacker’s objective was to either break the enemy tribes or break the drummer unit in the village, party poopers as they were.
In this game we also tested to include a lion male luring in the jungle, he would use his initiative movement to try to close in and attack any one foolish enough to venture to close. He would count as cavalry. His stats are given at the same picture as the Gamo tribe.

Special rules for this game was that all miniature could choose to either deploy in closed rank or open order given the small size of the tribal conflicts and the difficulties with the intervening terrain.

The Zulus and the Bushongo models equipped with large shields were given the special rule of given the enemy -1 to hit at ranged attack in closed rank, the same rule as heavy infantry.

The Zulus closed in but had difficulties to spread out on the flanks. The Gamo tribe laughed at the big cat hiding in the bushes and ventured to close...Their chieftain wanted a new rug in his hut.

Here are some pictures of the game.

I think that the altered stats from previous games are a lot better. Im not totally sure about the Zulus so some tinkering to the next game may be in order.
The lion worked surprisingly good and I think he will be used I many games to come, maybe some small altering of stats.

Any thoughts on the game or tips on how I could alter the stats, give units special rules or something else is appreciated. So next game can be even better.
Thanks for looking.
at 11/28/2012 11:16:00 am 7 comments:


More plastic jungle terrain
I originally got these from my good friend Jonathan in a miniature swap. I fixed up the bases and they are good to go.

And here are some comparison pictures to give you a sense of size.


I finished another base of Bretonnian archers.

With this base finished I now got enough models to make an standard size unit of archers to the Hail Caesar rules. 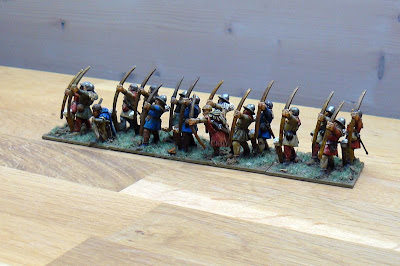 What I learned from this little sideproject is that painting simple clothing without all the cursed straps of Napoleonic troops, no fancy shield as I have done on some other models, is that basic troops in brownish clothing painted to a table top standard is quick, really quick work.
This is both a good thing and a bad thing because this could real easy distract me into starting up a 30years war project or continue on a medieval project instead of finishing what I have planed at the moment.
Now some new miniatures have arrived from an order and I am not “forced” to dig up these old Bretonnians from some box in the basement. Im not sure I could leave the archers all alone without some buddies or someone to combat but I have some things I really should finish of before I start on the next medieval unit. But as most of the time when I paint I could easily switch interest after a completed unit or model.
at 11/25/2012 02:40:00 pm 3 comments:

A new chieftain for my Vikings 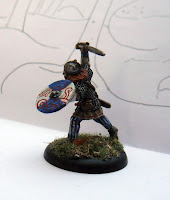 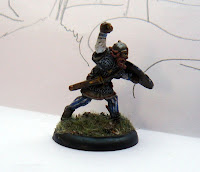 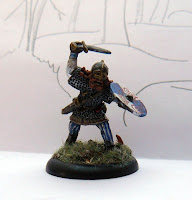 Another chieftain for my Vikings. The main color tones chosen on him are red and blue.
Miniature from Gripping Beast.