Imperial assault on the city of Yassnigork 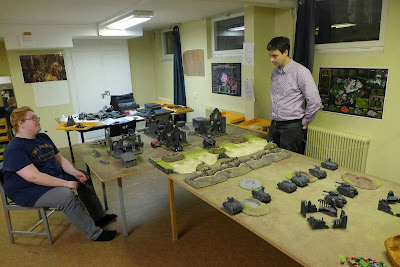 In the imperial backwater sector of Skernevo it’s the year 3 of the planetary assault on the Space marine of the Salamander chapter held planet of Tyrna.

The planet Tyrna have been totally cut off by the invading forces from the neighboring sector of Kaluga led under the imperial warlord Barglow Olecko.
Barlow have for a long time looked at the mismanaged planet Tyrna and the badly treated population that clearly needed help from outside to rid them of the heretical lizard worshipping marines, Imperial finest my as…

As the Salamander chapter have for some time mismanaged the planet and its inhabitants, some ill guided civilian and military casualties from the regular humans is to be expected.
But that will be a small price to pay for the million innocent and forcefully ruled populations. In time they will see the truth for what it is.
And when outside contact is next established the conflict will be all over since long time ago. Next mayor trading and contact fleet is not expected to enter the backwater sector Skernevo at earliest in 50years.


The city of Yassnigork is now facing an assault against its defenses.

The game was played as 2 vs 2 player game and the table was two standard tables forming an T.
The assaulting forces under the Warlord Barlow had an Mechanised force assaulting head on, on the trenches at the same time an outflanking infantry attack would brake throe their opposing defenses and make an attack against the point where the armored assault would enter the city. The combined push is expected to form a long lasting breach in the cities defenses so more material and men can be hurled into the city and slowly push the enemy out.

We played with 3000pts each side making the attacking force with two 1500pts armies and the outer defenses defending with a smaller 1000pts army but were to be supported by a 2000pts Salamander Space marine force located inside the perimeters of the city.
The objectives would be the larger buildings, holding them is important in the continued push or defenses of the city. 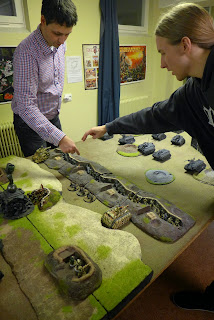 The mechanised push in motion.

A small child is seen on top of the trenches. This must surly be a imagination, a trick of minds.

My Hades breaching drill making an entrance behind enemy trenches, not exactly where I had planed but the assault starts from here. 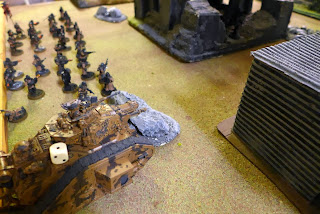 One of my flanks infantry assault supported by a Leman Russ kitted full of plasma weaponry. 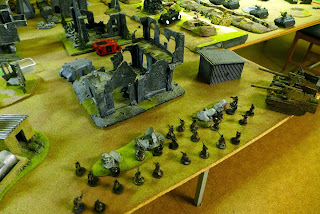 My other flank, infantry and close support artillery.

My right flank is under heavy counterattack. Heavy airsupport transported a large Terminator squad led by a heretical claiming to be the Imperial hero Vulcan. The hard pressed men of this flank tries to sell their lives as costly as possible.

The mechanised attack is ontop of the trenches clearing the way into the city.

The hulking plasma kittet Leman Russ Beast is brought down from its own weaponry, continuing overheating brought from the constant firing from the crew resulting in internal fire.

Massive and precise firepower brings down the heretical flier. The massed firepower from the autocannons finally finds a soft spott. Two 6 on the to hit roll, two 6es on the armour penetrations and you guessed it two 6es on the explosion ranges...
Im sure this will happen next game to...

A close firing melta gun wipes out the heretical dreadnought but one Guardsman is cought in the blast.

The Breaching drill is destroyed.

A strange sight indeed. A baby is seen in the rubble.
Rumors have it that its a sight of one of the emperors sons. And seeing this is a sign of victory to come, of victory reborn.

Others claiming it is a ghost of one of the untold thousands of civilian casualties of the initial bombardment.


Further investigation on this matter is needed. 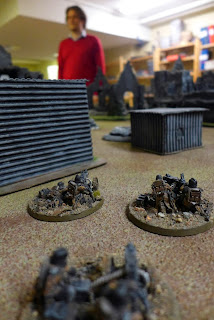 Taking up new firing position to blast the building held by the enemy. 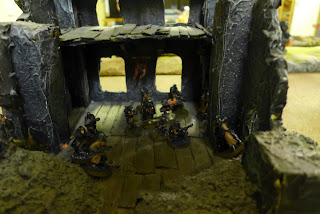 Clearing out the last remnants of the heretics my Death Korps has taken one of the buildings. 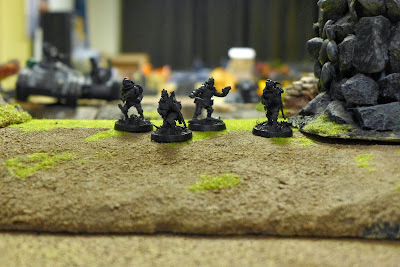 - Over the hill and far away.
The Combat engineers for the Death Korps having cleared the enemy comand bunker advance over the hill against the next line of enemies.

Time run out before we could end the game. And even thoe Im sure the heretics would not concure I will judge this would have ended in an imperial victory for the attacker.
With my right flank in an standstill, his terminators missing its transport and my autocannons having an field day.
My left flank largly unaposed with infantry pushing into the buildings.
The mechanised push is clearing the trenches for the last survivors and roling farward into the city. The enemy is hard pressed at the moment.

Panzer in the sand - Fow AAR 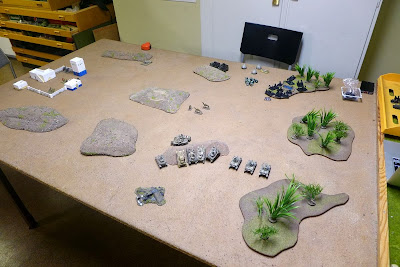 Last week Tobias and I had another midwar battle in Flames of war.
We played a small 1000pts battle, and I wanted to try out what the Panzer IV was capable of.
At a mere 1000pts you don´t get that many Panzer IV Im afraid but I thought it could atleast give me a taste of them.

So with a rather special list I was ready to tackle the American troops. 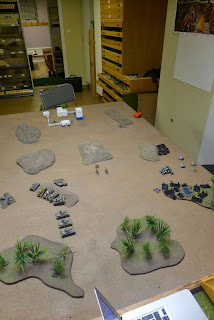 The game started with my force on the table and half his force waiting as reserves. With only the enemy infantry on the table I felt pretty strong. 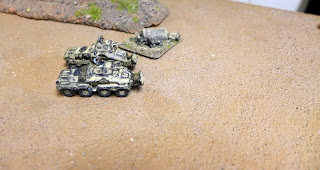 With full speed my recon armored cars managed to quickly take a closer look at the objective.
But it was a fools idea to try to capture the objective with a small fragile unit and the enemy infantry in their halftracks was on them in seconds and easily wiped them out. 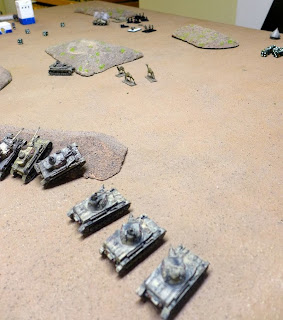 Meanwhile my Panzer IV bombards the enemy infantry from save distance.

The enemy reserve enters the table, a small unit of the dreaded Sherman tank. They set one Panzer IV ablaze on their arrival. 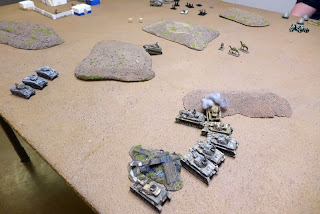 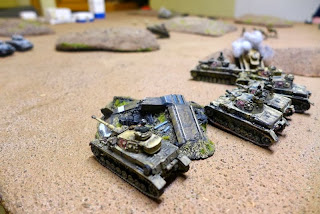 My plan now was to regroup, make a sort of firing line and just shoot them to pieces. With this much firepower they will surly die. 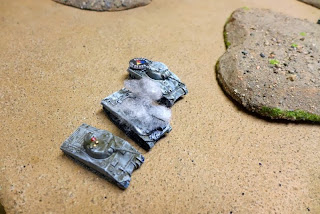 The result was one Sherman destroyed, one bailed out and the last one kept his nerves and defiantly stayed on the battlefield. 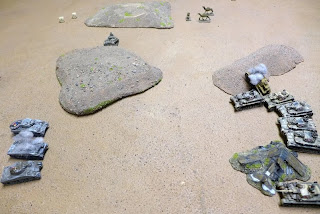 Next round another Sherman platoon arrived and a sort of standstill happened.
Both my mixed Panzer IV tanks and his Shermans traded shoots against each other. But with mostly short barreled infantry support variants of Panzer IV I had real problem to pierce his armor and the firefight ended with lots of burning Panzer IV before my troops had enough and pulled back. 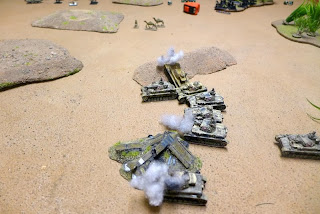 Darn it.. At first I really thought I had him.
My gamle with my armoured cars was a bad idea but I really wanted to see how far they could go,
Upon the arrival of the first enemy platoon that resulted in just on burning Panzer IV my shooting line with all my remaining tanks looked really good. But the dices didn´t match my plan. I just couldn´t pierce those tanks.
And then later with the arrival of another Sherman platoon I was starting to sweat.

So lessons from this match is that even doe the early Panzer IV with short barrel is a cool looking tank its in no way a good idea to engage a Sherman on equal terms. They was rather good at bombarding infantry so I guess they behaved as they should do historical. 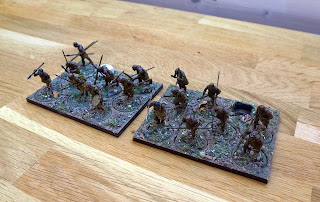 I asked my friend Jonathan from Tiny Terrain (http://tinyterrain.com/ ) to make these special movement trays for me.
And they turned out just as good as I had imagined.

I had an idea of using this sort of movement trays for my Tribal African project and wanted them to have an base with of 10cm (4x25mm) and holes to fit my 25mm bases. The plan was to use them in Hail Caesar, using one base for a “small” unit and two bases for a “standard size” unit. I really think this will work out great.
It will ease the moving of the miniatures but still have that irregular warband look Im after.

I have now based two bases and made a small hole for a dice to act as a casualty marker. These were sort of an test piece and I think I will continue in this style on the others. 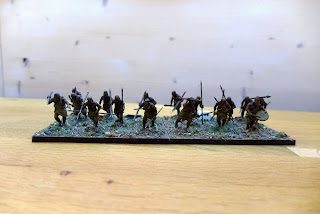