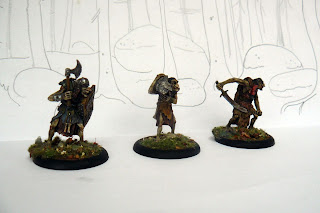 I can only recomend the trolls from Ral Partha, those sculpts are so full of life. And price is just perfect.
For more pictures of those trolls look here: http://kampgruppe-engel.blogspot.se/2013/02/here-be-trolls.html
at 4/29/2013 07:12:00 pm 9 comments: 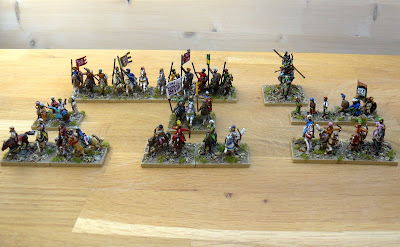 My gaming club (VÄS - Växjö Spelförening) have chosen to game a DBA campaign and chosen Mongol terror as the theme of it and this is the army I will play in it.
In the real world the Khwarazmian Empire got soundly beaten by the Mongols but we will see if I can give them some payback on a tabletop.
http://en.wikipedia.org/wiki/Khwarazmian_dynasty

The miniatures are from Essex. And they are surprisingly good, I really thought they would look like crap, how wrong I was. Ok ok, they don’t match up to my Russians from Mirlitons but not close behind.
I really thought that as Essex are one of the great old companies the sculpts would be all up to yesterdays standard but with bad moulds by now... I was totaly wrong, I really like them and am already considering my next army...

For painting I went with a kind of “easter egg” theme, lots of bright colors. I wanted these to really stand out on the battlefields in comparison with horse tribes brown and medieval Europe brown armies…

The banners are from varies pictures I found on the net, scaled down to fit my miniatures and then printed on paper and then some extra colors from my brush.

On the elephant I added some extra colors, inspired of Indian elephants of today used in celebrations and so on.
http://www.google.com/imgres?imgurl=http://upload.wikimedia.org/wikipedia/commons/3/32/Decorated_Indian_elephant.jpg&imgrefurl=http://commons.wikimedia.org/wiki/File:Decorated_Indian_elephant.jpg&h=1704&w=2272&sz=4278&tbnid=4_iQ6H1-bjZhWM:&tbnh=90&tbnw=120&zoom=1&usg=__bOv44LQTtuTaTEl8j4ch67prRMw=&docid=PBb5Lf40ENcq2M&sa=X&ei=I0J0UejbBcHK4AT3s4DACA&ved=0CDwQ9QEwAQ&dur=255

I needed a little painting brake from the last Napoleonic unit and my current main project so I painted up these fellows for my Tribal African project. Some rather speedpainted miniatures and the white on their clothes didn´t turn out as I first had planned but it will have to do. Its not a speedpaint if you have to go back and fix some things or redo them. 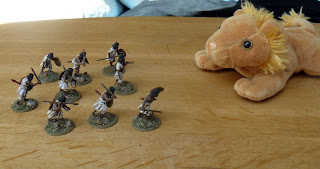 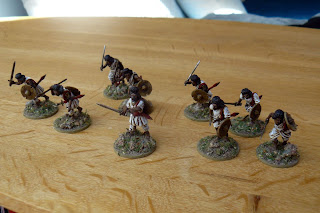 The Beja swordsmen are from Perrys excellent plastic box and as I have miniatures still on the sprue from that box I thought they could be that little brake I needed. To paint something different, and what’s not to like about these “Fuzzu wuzzies” and their distinct hairstyle.
at 4/08/2013 11:20:00 pm 2 comments: