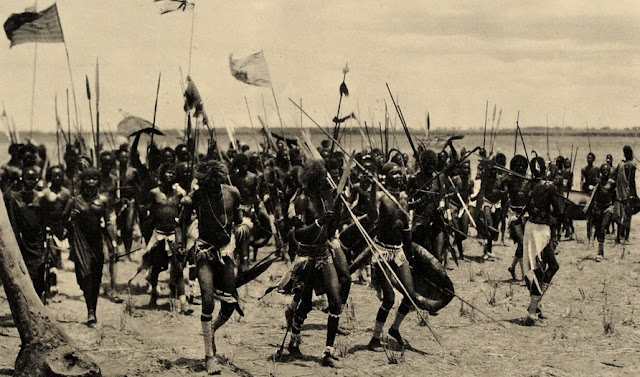 Here I will try collecting various ideas, tribes and list miniatures
They could all be used in my Tribal Africa project


I have for a long time now been interesting in getting into a kind of tribal Africa, a time before the introductions of gunpowder or Maxims…
Mano a mano, pure strength and cunning.
And when I read the Wargames Illustrated 292 that used the Hail Caesars rules to battle it out between the Zulus and the Matabele it was decided.
The tribal wars was on...

Its hard to think of African tribal warfare without the Zulus and their Impi.
For miniatures I would look for Warlord Games Zulus. Its hard to argue with the price of plastics.

A small review of the Unmarried Zulus

The Matabele are an African tribe whose origins were in the mighty Zulu Nation. During the early 19th Century they rebelled and create an infamous name for themselves as they escaped North to settle in what is now Zimbabwe. The Matabele Kingdom was defeated in 1893 and 1896 by Cecil Rhodes and his British South Africa Company.


The most striking feature of the Kushites is their vermilion and white body paint which they adorned themselves with before battle. Body paint still plays and important part in African tribal cultures. White and red can represent life, death, protection and aggression. Described by Herodotus as the tallest and most beautiful people in the world, they must have been an intimidating opponent.


The Ila (or BaIla) are a tribe based in South Central Africa, what is now Zambia.
They were fierce warrior herdsmen in the 19th Century, powerful enough to fight off Matabele cattle raids and Arab slave raids. They did not oppose encroaching British Colonial rule in the last years of the 19th Century as their lands became Northern Rhodesia.
Their distinct tall hair-style was fashioned so that tribal members could see each other moving through the tall grass of the Kafue Flats.


The ancient history of the Nguni people is wrapped up in their oral history. According to legend they were a people who migrated from the north to the Great Lakes region of sub-equatorial Central/East Africa. They migrated southwards over many centuries, with large herds of Nguni cattle, probably entering what is now South Africa around 2,000 years ago in sporadic settlement, followed by larger waves of migration around 1400 AD. Nguni peoples are pastoralist groups, part of the greater Bantu group occupying much of the East and Southern parts of Africa.

These are a collection of miniatures that can be used to represent Northern African tribes.

Separet shields that maybe could be used to other tribes
http://grippingbeast.com/product.php?ItemID=2294

These represent various tribes of Congo

Another vague topic as it represent various tribes of Sudan.
A good start would be the excellent Perry Miniature plastic box, it includes different head options which makes this box perfect for tribal Africa. One box includes 40 miniatures. I’m guessing it could easily be used to represent other tribes as well.
http://www.perry-miniatures.com/product_info.php?cPath=22_62&products_id=2593

Small review of the box.


Foundry miniatures got an huge selection on miniatures but they are pricy. I will list them here non the less.
http://www.wargamesfoundry.com/our-ranges/darkest-africa


Obelisk miniatures, got some really good looking animals that should fit and got some more fantasy inspired African stuff if your want.

Inspirational pictures - Wargames illustraded, We come for your cattle


If you know any miniatures or other stuff you think I should know about, please write a little line here.