Here are part 3 from our Horus Heresy Escalation campaign we had at Wexio Spelkonvent 2017. At the moment we are up to 1000pts.

This was the last game I played.

My Solar Auxilia would assist the Iron hands vs Night Lords and Alpha Legion.
I choose to put my Veletaris with their Dracosan transport in outflanking as per the special rule from previous game. 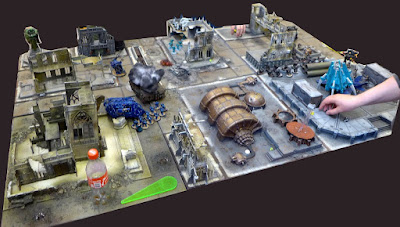 The traitors got the first turn and hit us hard...
Long range fire from the Night Lords combined with the fire position of the Alpha Legion meant that amongst other things we lost a Dorodeo and a Rhino just like that... 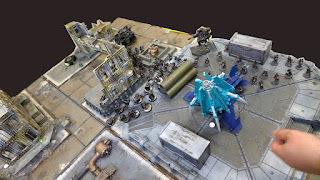 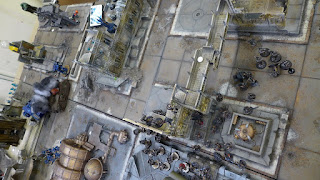 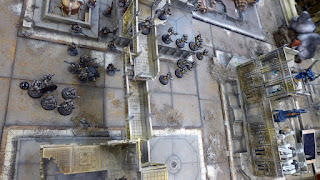 Alpha Legion fire position can be seen to the right end of the picture. Our response was pouring fire onto them and their casualties number started to staggering up. My Veletaris with Rotor cannons was dealing out an especially hight number of wounds... 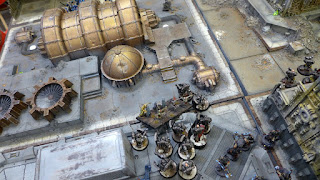 A zombie horde swarmed out of the ventilation shaft, apparently something in the underground had disturbed them... Our game was linked to another table and a random event down their had triggered this. Thanks guys...

But the Iron Hand managed to make short work of them and they posed no real dangers to the Astartes.
My axe vielding Veletaris is supporting from the rear, ready to move up if anything scary shows itself (and using the Astartes as shields from enemy fire). 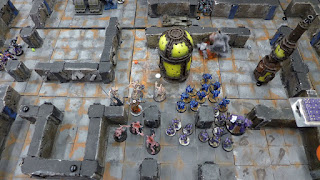 The Nigh Lord player figured that if they could get up here he could get down there... So a unit of Night Lord jump infantry left our table through another ventilation shaft and join the traitors in the underground. 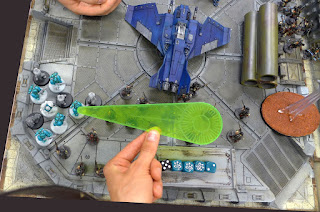 Alpha Legion flamer squad deployed from their special drop pod that flew away. I took far less casualties then I should have here somehow.

For some reason I didnt take any more pictures of our game after this unfortunately. That is to bad because their were lots of moment that really should have been captured.

Later my Dracosan entered the opponent table and deployed its Veletaris. Nether the Dracosan or the Veletaris managed to make a big impact on the table even though they found a Lascannon platform to operate but because the mission was to have units in the opponents deployment zone they still filled a role.

My Veletaris with Rotor cannons again performed excellent. Gunning down Alpha Legion marines in heaps... Their squad leader is recommended for a lot of medals after this game... The dice Gods were really with them in this day.

My Veletaris with Power axes was confronted with a Night Lord Preator with terminator bodyguards and lets just say that striking last against such monsters is not a fun thing to do...

After all the dust have settled on the battlefield the Loyalist were supreme and won a victory on this day. My Veletaris with their Dracosan that moved up from the flank through the underhive combined with Iron Hands soldiers that had managed to push forward carried the day.

On the other tables it looked something like this. 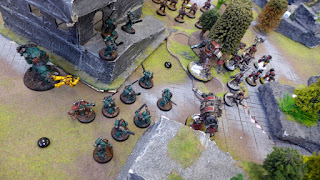 Sons of Horus (or should that be Lunar Wolves?) vs Word Bearers 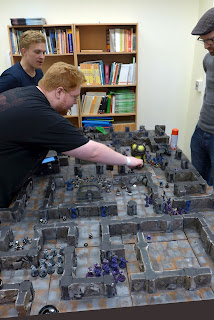 Space Wolves and Space Wolves vs Emperors Children and Emperors Children.
This game and ours were linked meaning that we could effect each others tables.
Some units from each tables, troops or npc:s ended up on the other ones for different reasons, finding ventilation shafts, big holes from artillery or space ships in orbit, cave ins, and other effects.
At one point I tried to use my `one use artillery´ from my HQ but the space ship in orbit didnt catch any enemy in the underhive as I guessed the coordinates wrong. 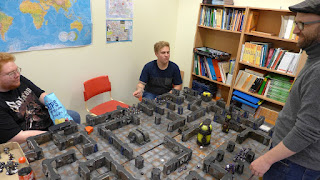 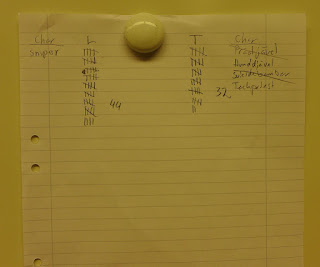 At the end of the day we had managed to score a nice victory over the baddies, 44-32. That could come in handy in the campaign as this will affect the overall story and open up for some strategic options later on. 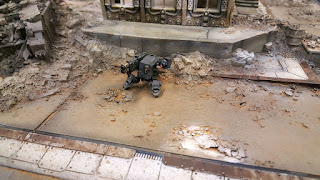 Daniel had painted a really really nice cityboard for us to play on, on this day. Besides organising the event. A special thanks for your work Daniel. 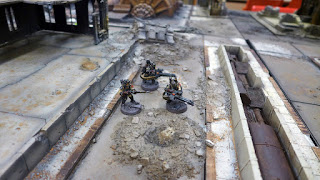 Unfortunately I only managed to capture two armies from the 1000pts event. 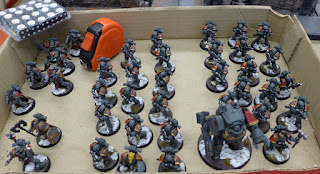 As always, not nearly enough pictures where taken but this is what I got. I wish I had the time to take some more pictures of the other players games.

My Solar Auxilia troops have had a small respite and resupplied but more importunity my Prime (sergeant) from the Rotor cannon Veletaris squad had gotten up from his sickbed sustained from the injuries he had taken as he single handedly blow a Land Raider up in the previous game.

The Imperial command had ordered us to make a tactical move trough the underground in force, destroying anything we encounter and be ready to use our hidden movement under the battlefield to deploy behind enemy lines.

The problem was that Astartes of the traitor Emperors Children was also trying to use this part of the underground for redeploying forces as well.
In the previous game on this table the players had made a whole in one of the big gas tanks resulting in toxic fumes spilling all over the place. The whole table would count as toxic or vacuum from the advance rules of Zone Mortalis, this would be of no problem for my troops as they were all wearing Void armour. 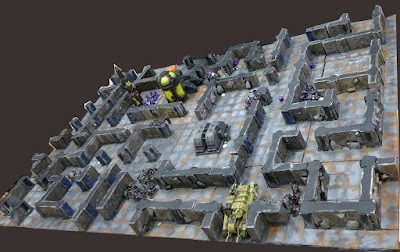 The Emperors Children moves out fast, to fast for my liking.
On the good side the enemy stumbled on to a big minotaurish beast and had to deal with him. It didnt take much time for the Contemptor Dreadnought but still...

The enemy commander managed to find a pet in the underhive, perfect just perfect.
I dont really remember but I think the dog gave him a invulnerable save, think of a Saint Bernard with that barrel for refreshment.

My Dracosan where holed back but other then that I gave an general advance order.

My Veletaris with power axes managed to find a breaching drill, that could come in handy against those traitors...

One of my Lasrifle section was gunned down by the Dreadnought.
But I was more worried about the traitor Emperors Children HQ with its bodyguard, equipped with jump pack they would be over me in no time.

But... My Veletaris with Rotor cannons totally obliterated them totally, even with the refreshments from the dog...
Damn... I had always thought that the Rotor cannons were a rather bad unit but I included one just for the rule of cool. With the number of dice you will find a crack in their armour...

Meanwhile the enemy on my right flank had moved forward and my Dracosan and Veletaris with Volkites moves up to counter them... The 5" blast from the Dracosan makes a huge whole in the enemy unit... They are finished of by the Veletaris.

By now the road was clear and the Veletaris had mounted up and the Dracosan speeded through the enemy lines.
I got a small Lasrifle section on my left flank that could run through unhindered as my axe wielding Veletaris took out the enemy tacticals in front of them with the help of their breaching drill they found. I was later charged by the Contemptor.
I had managed to take out the enemy tank and about now all was left of the enemy force was that brutal Contemptor Dreadnought that just slaughtered its way through my lines.

A victory for the Solar Auxilia.
As a special reward for this scenario in my next game I would be granted to deploy 1D3 units with outflanking to simulate the movement of troops under the enemy positions. And of course I rolled a 1...

Here are some pictures from the other players games 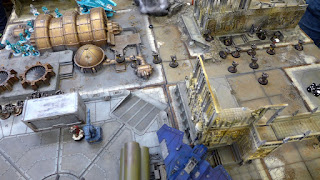 Night Lords vs Sons of Horus 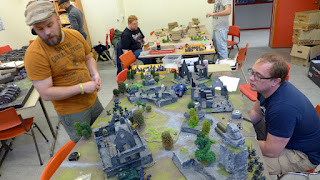 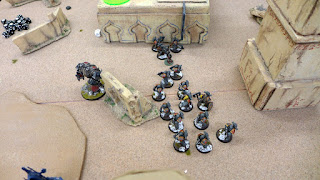 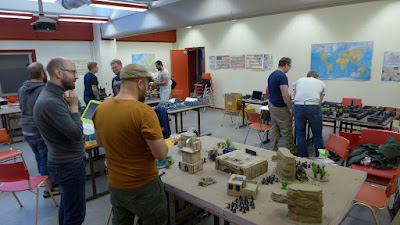 Earlier this month we played another campaign day in our Horus Heresy Escalation campaign day, we are up to 1000pts now.
This post will be part 1 of the event. 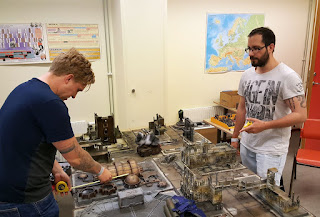 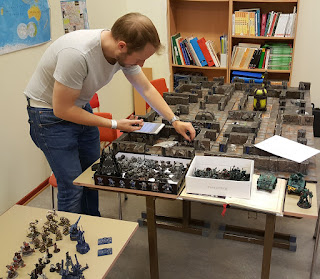 
My first game with my Solar Auxilia would be against Linus Night Lords
This game had two types of markers, black and white. We decided that you would score points for capturing black markers in the enemy deployment zone and capturing white ones gave you a roll on a special list. That special roll could result in anything from neutral enemies, booby traps, weapon platforms or special equipments.

The Nigh Lords stumbled on two mutant beast having a nice camping, the Doredeo made short work of them.

The Solar Auxilia infantry moves up, the Dracosan takes a hiding position from the enemy lascannons on the Landraider waiting for the enemy to instead close in on me.

A Tarantula tries to defend a black marker as the axe wielding Veletaris moves forward.

I had managed to shoot some jump pack marines but they are fast and moves in. I managed to take some more down with defensive fire as they charged.

The enemy Preator and bodyguards disengage from their Landraider.

A hole is made in the Rotor cannon Veletaris squad and they are pushed back. My Veletaris with Volcites disembark and the Dracosan moves back. Time for some payback...

The Jump pack marines are swarmed and stabbed to death with bayonets, hurray for regular humans...

And they really didnt even stand a chance...

But the Dracosan managed to get a perfect hit and he or rather what is left of him is smeared all over that big cliff...

With high moral my lasrifle section moves up and fires at the marines, to no effect...
My Veletaris with axes had taken a lot of casualties from that Daredeo as all its weapons just cuts right through my armour. So I reckoned my only option was to charge it and hope that their prime (equivalent of sergeant) would hit it with its meltabomb...

The enemy landraider was pushing forward and blew my Dracosan to pieces. My Command squad tries to use the Lascannon platform as my Veletaris Prime with a medic droid (Medicae Ordely) tries to moves forward.

I would never reach a objective before the game would end so I decided to charge the Landraider and hope for the best, the Medicae Ordely died from defensive fire but the Prime survived... And managed to plant a meltabomb on the Landraider blewing it into smithereens, unfortunately taking the Prime with it. He was awarded a medal as he was patched up on the sickbed in time for the next game.
On the other side of the table my Lasgun section had been killed by the Tacticals but my Veletaris with axes managed to survive the whole game in close combat with the Doredeo and later the tacticals to, tying that flank down.
Nether of us had managed to get a objective on the opponents table edge but I had managed to slay the enemy warlord resulting in a small small victory for the Loyalist...
Linus Night Lords had managed to find a civilian that he choose to torture for information in the game earning the traitors a point in the campaign results.

A BIG THANKS to Linus for this excellent nerve shattering game, one of the most intense and fun games I have had.
My heart was still pumping fast when we had a brake for lunch after this game.


Here under are some other pictures from some players game as we had our. 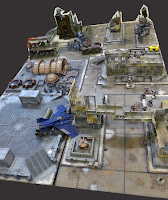 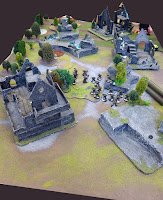