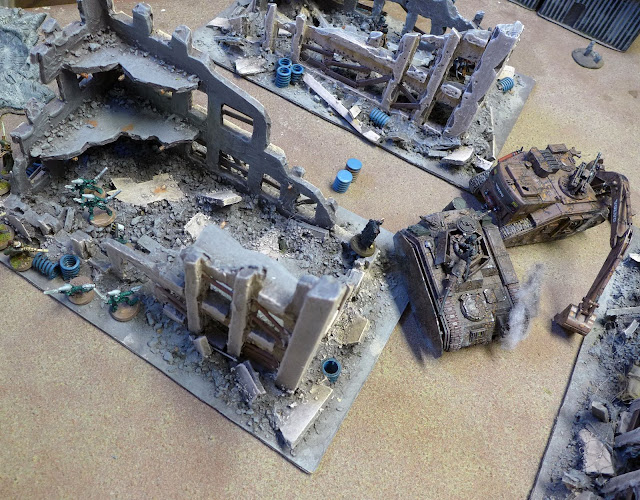 This is the After Action Report of Chapter 2, Game 2 in our The Reconquest of the Sertoria Comitius campaign.

My friend Johan and I decided that it was really about time to get another game in on our 40k campaign.
For this story we decided on something special.
I was to start the game with a immobilised Chimera at half wounds (we had decided that the chimera would be immobilised for the entire game) but for an reduced price, of just 40% of a fully working Chimera.
We would play a 300pts game with thematic armies and the objective for the game was to take out or save the Death Korps Marshal.
The idea was that the Aeldari forces located a stranded Marshal and would try to take him out to dent the command structure of the Imperials.


For a overview of the story so far look here:
http://kampgruppe-engel.blogspot.com/p/blog-page_25.html

For all the blogpost from this campaign click here:
http://kampgruppe-engel.blogspot.com/search/label/Campaign%20-%20The%20Reconquest%20of%20the%20Sertoria%20Comitius


Marshal .813 was travelling the ruined suburbs of  Hippo Diarrhytus just at the edges of the city of Portus Lemanis when his Storm Chimera was hit by some kind of explosion.
If this was some kind of booby-trap, some other kind of road mine or up until now undetonated bomb was to early to tell without and more precise examination.
Nothing Marshal .813 had time to at the moment.

No enemy movement or further activity was spotted and a small unit of combat engineers conducting anti mine operations as a small unit of grenadiers patrolled the parameters.
All this so Marshal .813 could surveil the salvage operation of his Storm Chimera by an Atlas recovery vehicle. 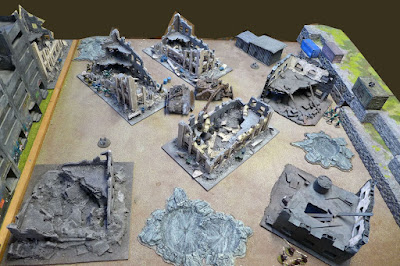 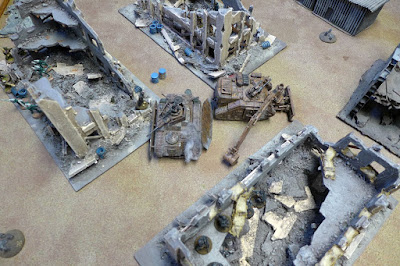 Aeldari forces arrives at the perimeters.
We decided that they would have to randomise entry and was not allowed to charge on the first turn. 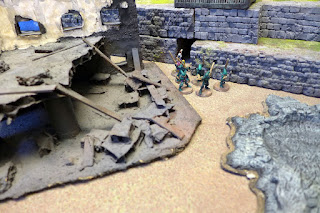 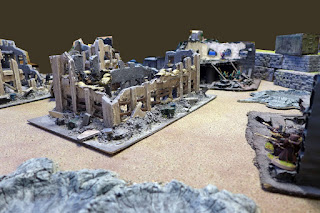 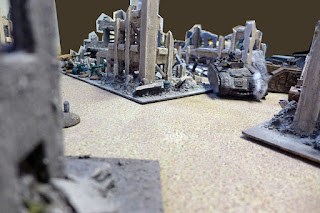 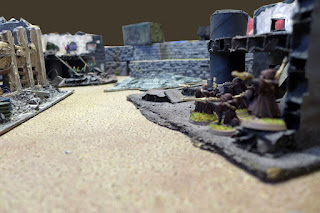 Aeldari rangers are seen taken up fire positions in the ruins and the Warlock and Striking Scorpions are seen advancing in the background. 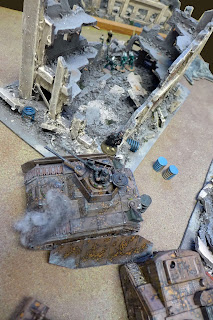 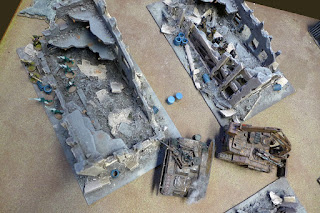 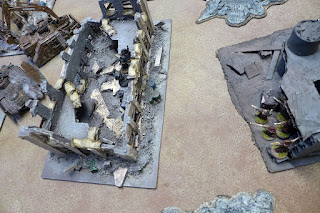 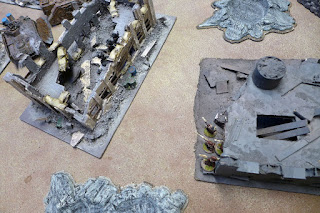 The anti mine operation of the combat engineers seizes and the enemy rangers are greeted with a hail of solid shotgun slugs, felling one of their numbers event through the protection of the ruin and their cameleoline capes. 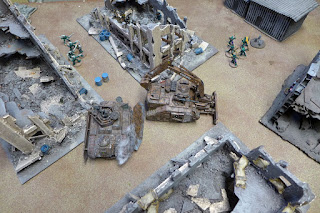 Striking Scorpions moves in from both sides... 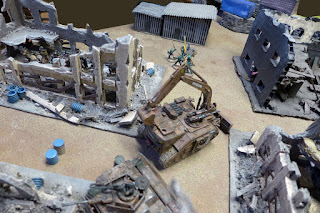 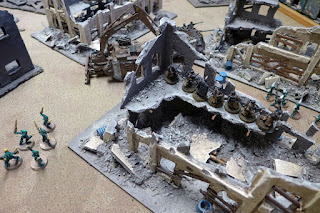 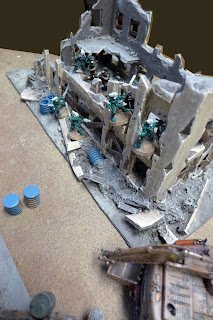 The Scorpions charges and are climbing what is left of the building... 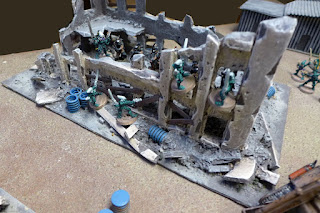 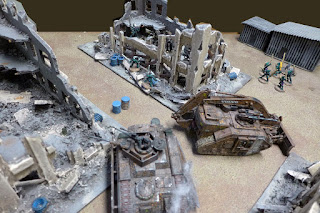 But the grenadiers and the Marshal put up an surprisingly good defence. 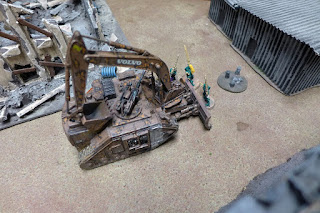 The Atlas but in full gear and storms forth... Trying to take out some of those insectoid xenos... 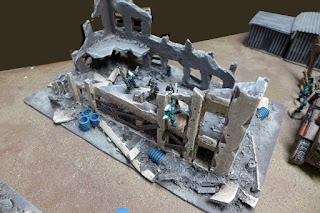 Both sides are taking casualties and no grounds are given. 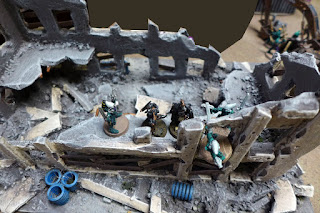 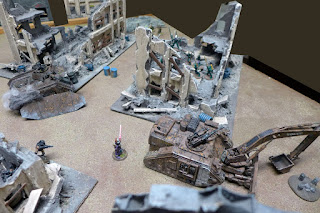 The Aeldari Warlock runs behind the Atlas as the Striking Scorpion it had engaged had fled into the ruin trying to get away from the long arm of the Imperium... 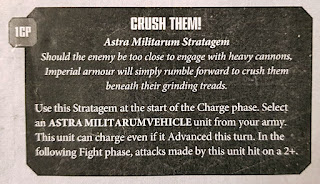 This could of course not be tolerated and Marshal .813 ordered the Atlas recovery vehicle to Crush them!... 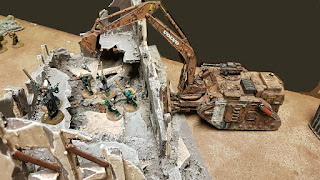 -..Bad boys, bad boys. What you gonna do when the Atlas comes for you... 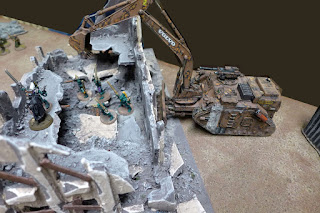 No where to hide... The long arm of the Imperium touches Xenos in "bad" places... 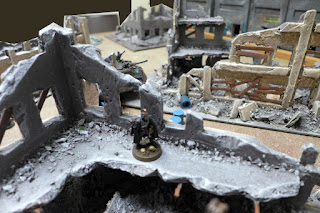 The Striking Scorpion Exarch is finally taken out with the masterful sabre skills of the powersword fielding Marshal .813. 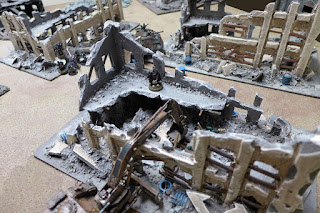 The Aldari Warlock are seen engaging the combat engineers as the Atlas lifts fallen walls and rubble trying to find the hiding Striking Scorpions in the ruin bottom floor. 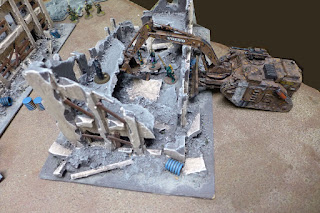 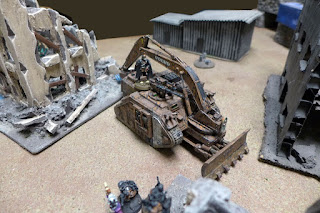 Marshal .813 had survived totally unharmed... Seen riding out of the combat zone on his new ride... The mighty long armed force of the Imperium...

His grenadiers had paid the price with their lives to keep the Marshal unscratched.
All in the cold blooded quick calculations made by Marshal .813 at the start of this enemy contact.

A really big thanks to my friend Johan for yet again excellent and really really fun game in our campaign.


More pictures of the Atlas can be found here:
http://kampgruppe-engel.blogspot.com/2019/01/death-korps-engineering-vehicle.html

I downloaded a free app on the phone and played around with it som. The first upload i made didnt seem to work so here is another try.

It seems that blogger is having problem with them and they look rather bad compare to my original pictures but atleast it works now.

And here is some more.