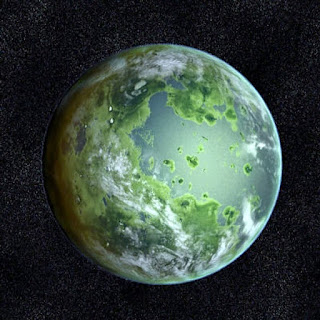 Far out from the standard transportation and trade routes a until now hidden system is found.

A star system with five planets, an asteroid belt and several small planetoids at its outermost edge.

The Imperium had here found a perfect planet, green and full of jungles and vegetation. A Garden of Eve if you will. The initial intel sweeps from the Magos Biologis of the Mechanicus shown no intelligent native species.
With no enemy activity in the system of any kind, an order of colonization and industrialization is issued.
This virgin planet was named Sertoria Comitus.

Deeper in the denser part of the jungle ancient temples and strange totems were found, to the colonist unknown designs or origin. These most be of a long lost civilization of some kind.

Hundred and twenty standard years after the first step of human colonization, the planet was attacked.

An all-out attack on the planet is initiated and the Planetary Defense Forces are pushed back and much of the development and urbanizations are bombarded and destroyed.
The xenos are described as extremely fast and sleek, and utterly brutal and shows no regards for the human inhabitants of the planet, rather the opposite with almost hatred

The alarms reaches the Imperium and prepare movements of troops to help out with the defense and a counterattack.

Death Korps of Krieg forces from the 317th Grand Armeé are amongst the forces responding and are deployed and prepared for war.

The conflict would be known as the "The Reconquest campaign of the Sertoria Comitius" in the eyes of the Imperial scribes.


The whole campaign can be found here:
http://kampgruppe-engel.blogspot.se/search/label/The%20Reconquest%20of%20the%20Sertoria%20Comitius%20campaing

The Death Korps of Krieg from the 317st Grand Armeé had made planet fall and secured area of control, met up with planetary overlords and the local defence forces and reinforced important locations for future operations.
It was now time to move out.

Here follows the Armoured Spearhead under the command of Tank Commander .198 Janusch Blitzen that was pushing westwards through the Jormungand Depression in force. The Spearhead had been tasked to push in force to expand the initial area of control, destroying any enemy encountered.

The Armoured Spearhead under Tank Commander .198 Janusch Blitzen had been ambushed by alien armoured forces during his reconnaissance in force of parts of the Jormungand Depression that resulted in heavy losses on each side.Autarch Amrion Yrashin had stalked the survivors from the ambush, gathering in forces to make another attack on the Death Korps of Krieg.
http://kampgruppe-engel.blogspot.se/2018/04/sertoria-comitus-game-2.html

Tank Commander .198 – Janusch Blitzen and the other survivors from the Eldar attacks had managed to fall back to a secured areas at the forward pushed airbase. Field officer .257 - Ekkehard Kautz greeted them and took over the custody of the prisoner, the Eldar Autarch that had harried Blitzens forces for a long time.

Tank Commander Janusch Blitzen was recovering from the wounds suffered at the forward pushed airbase. He and his men was in need of the much deserved sleep and food the barracks and hangars could offer.


Dominus [0010100101010101] from the Mechanicus was refitting, refueling and blessing the mighty aircrafts of the Imperial navy with his servitor. Blitzen had not had time to talk that much with him, as he was more interested in making the aircraft ready for flight then socializing. This suited Blitzen fine, as he was tired from the long hours in the field.

Chapter 2
- The Battle for Portus Lemanis -

Portus Lemanis is a large city that had been in constant warfare since the Aeldari forces descended on the planet.  The Death Korps from the 317th Grand Armeé had bolstered the planetary defence forces but wanted a new route into the city to be able to move in heavier equipment.
The bridge at the suburbs of Hippo Diarrhytus was chosen as a good target for this.
http://kampgruppe-engel.blogspot.se/2018/04/sertoria-comitus-chapter-2-game-1.html

An Storm Chimera carrying Marshal .813 is struck by an explosion. Grenadiers patrols the parameter as combat engineers conduct mine clearings and an Atlas recovery vehicle starts the salvage operations.
All this as Aeldari special forces strikes...
https://kampgruppe-engel.blogspot.com/2019/06/sertoria-comitus-chapter-2-game-2.html