My Saracen force, at the moment 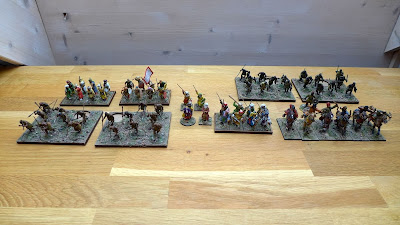 I just love army photos, to see all the miniatures together they usually looks even more impressive then single.
And thats why I thought it was time to take some pictures of my collection at the moment. What I have painted so forth.
In these pictures are also miniatures from my Tribal Africa collection that has been recruited to act as skirmishers to my Saracens.

A small but growing force.

With these pictures I would just like to say that If you like them please take pictures of your collections and upload for us all to see. I love these kind of armypictures. 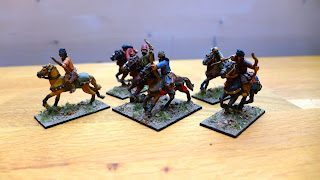 Latest unit to my growing crusader era muslim army are a small unit of Turcoman horse archers.
The miniatures are from Gripping Beast.

I painted them in a more brown or duller colour tones then the more Arabic/Egyptian Saracens I painted previously to show that these are from a Turkic tribe and not Arabs.

Overall I like the sculpts but some of them seems to have the same problem as some of the other older sculpts from Gripping beast with to short arms and the miniatures are really a bit to chunky for my taste. But I like them none the less. 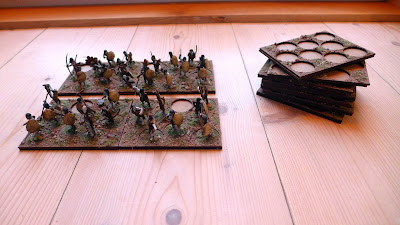 I finished the last things with the flocking on eleven new movement trays for my Tribal Africa project.
Soon moving tribesmen all over the table top will be no trouble at all.

These are of my own design and custom made for me by Tiny Terrain http://tinyterrain.com/.
There are 9 holes in the movement tray for eight 25mm bases and a spare one for holding a casualties dice in games like Hail Caesar or such.

The miniatures on the trays here are Kushites from Warlord Games http://store.warlordgames.com/collections/achaemenid-persians
And better pictures of them can be found earlier in this project, just look at Tribal Africa as the label.

Ruins for my Saracens

I found these at a sale and thought they would fit in nicely to my Saracens.
They are actually GW Lord of the rings terrain but I think they work.

Its just a small step to improve the dessert terrain for my gaming club and I hope to make more like these.
I used a zenith light technique (black primer and then a quick white primer at about 45degreeds angle) and then added some sand colours deluted with water and added some sand on top of the actual model. A very quick and effective technique.

You might wondering about the strange bases, well its so I can fit them all together to form a sort of larger ruin area terrain. 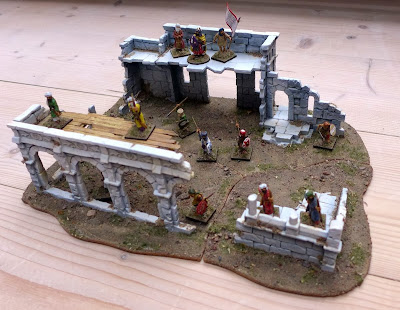 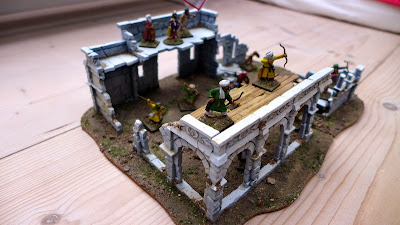 My Saracens have recruited some new infantry.
A Commanding officer and a drummer is there to guide them. 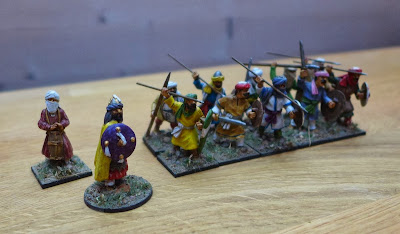 I just love the colours... Maybe a little over the top but I really want them to look like a sort of Easter egg collection...
The rank and file are from Musketeer Miniature and the officer and the drummer from Gripping beast, as well as two of the spearmen.
About the colours, these are all a sort of test run for my cavalry that I intend to have lots of colours and I wanted to try it out on something before the intended miniatures. I also experimented with some details on the clothes. The plan was to have duller colour on the infantry but I think I can easily hide these a miniature or two in larger "more boring" infantry formations later on. 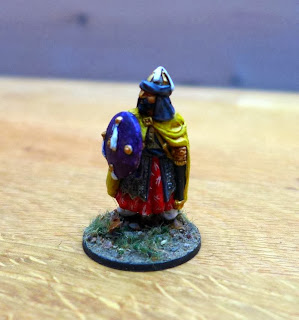 Some closer picture of the officer, I wanted really bright colours on him and experimented a little with the extra details on the red. 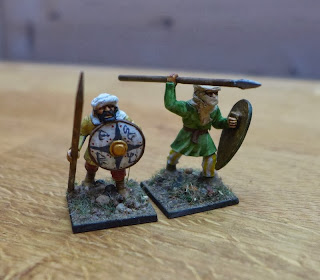 These two are actually plastic miniatures from Gripping beast Dark age warrior box. I changed the shields and added a turban in greenstuff to their heads. I still need lots of more practise on this but I think it shows some potentials. 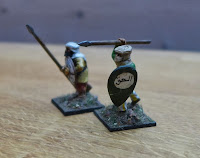 Hmm I think I will have to practise some more to get even more details onto my miniatures...
http://www.firstlegionltd.com/con01-psaladin-sultanofthesaracens.aspx
Imagine a 28mm miniature with those details...
at 12/18/2013 10:11:00 pm 7 comments: 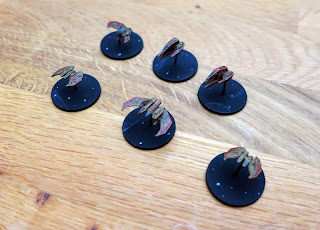 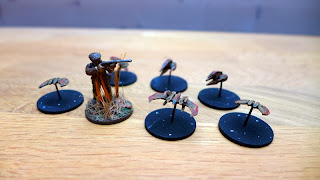 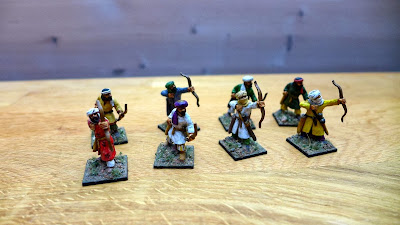 
Some archers from Musketeer miniatures.
http://www.musketeer-miniatures.com/store.php?r=5&rule=Historical&id=23

Im experimenting with some colours their garments, some of these may look a little to bright or colourful for my taste but at the same time, an Saracen army should be full of colours to make it really stand out from an more duller or browner western army.

I played my Death Korps of Krieg Assault Brigade and teamed up with a friend using a D Korps Siege Regiment. We had each 1000pts to compete against the others 2000pts armies.

This campaign was a sort of test run for a larger campaign that is planed for this summer and we were more then happy to help the organizers to test out some scenarios and the whole thing with running an campaign. 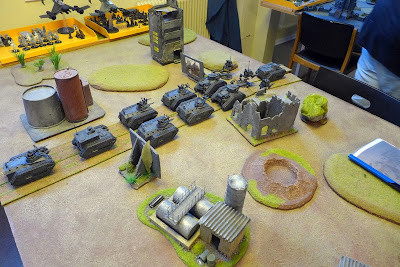 Enemy column in a sort of march formation. This is one really nice display of an great looking army.

My Death Korps deploys and readying themself for cutting of one of the escape routes.

Enemy mechanised formations are pushing hard on one of the flanks.
Some spectators made jokes about German Panzers vs Polish cavalry about now. 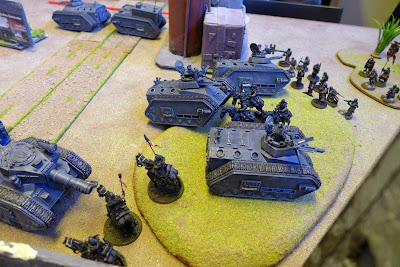 Now look closely here in this picture.
The cavalry squadron closest are about to charge head on into that Leman Russ, the next squadron have moved up in position between the three Chimeras and a infantry squad led by a Watchmaster you should keep an eye after in this game, packing krak grenades are moving in one of the Chimeras

This picture is taken mid assault face.
The Leman Russ was taken out and one Death Rider got wounded in the explosion.
One Chimera was taken out in the shooting phase and that ment that the other squadron of Death Riders found a prey in the now footslugging guardsmen.

A salute is given to the fallen.

A new enemy Leman Russ in sight. It opens fire but didn´t manage to take the whole squadron out...
The last Death Rider issues an duel to the clunking behemoth, it will pay for his fallen comrades.

Unfortunately the enemy is not that chivalrous and the chimera on the hill opened its rear doors and all its occupants opened up with their lasgun. Our Death Rider was shot in the back by 10 men.

Mean while a enemy armoured Sentinel formation are seen walking and armed with lascannons trying to get a clear shot on the other Death Rider squadron.
Some would say that that is overkill to hunt horsemen with antitank guns, I say that the enemy is really afraid and this means I have the advantage and a moral victory.

Enemy boxformation, trying to protect their wounerable rears as help is on my way from the opposite table edge.

With a heavy noise air power enters the fray and tries to cut of the enemy breakthrough attempt.
Seen here on a very close dive bombing run...

Airial photo over the centre of the table. Airpower in the form of two Avengers are seen roaring with their gatlings blazing.

Enemy airpower has dropped one unit of Veterans and a unit of Stormtroopers equipped to the maximum with plasmaguns near my HQ.
The Veteran Company commander knows his time is up and thanks his men for their unconditional faith and loyalty.

Hardly a suprise, the forest is cleaned of any survivors.

This my friends are the sight of payback...

My friends Avengers released his bombs on the Stormtroopers... All of them...
If you want something dead, be sure to kill it... 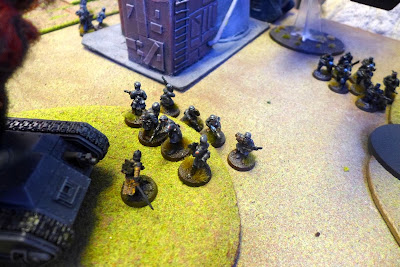 Look closer at my Watchmaster here (D Korps equivalent of an Veteran Sergeant). He is the last survivor of his squad, all others was gunned down by enemy Veterans. He survived miraculusly, finding cover somehow in the open.
Surviving lasgun fire and plasma gun fire, he survived a stray bomb from one of our Avengers, shrapnel fire from an exploding chimera and so on. At one time they even tried to run him over using a tank shocking Chimera.

This is one nasty mofo... 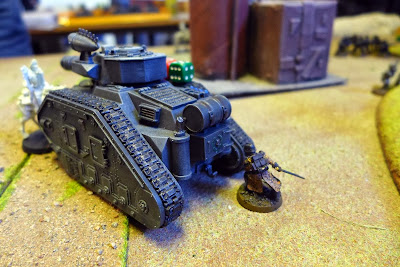 With a coup de grâce, a sabre in one hand and a weapon maybe more fitting for antitank duty a krak grenade in the other my new favourite Watchmaster attacks an enemy tank. While my allies mounted Commissar attack it from the front.
I think that Watchmaster has earned the right to be given a name as is the custom with the Death Korps, at first they are just serial numbers. Any suggestions of a name is welcome.


A mightily success, the enemy formation is broken and his breakthrough attempt is stopped.


Army formations are moved on the campaign map and new scenarios are choosen to represent these actions.


The Death Korps are assigned a assault upon an enemy fortification. To our help we are also assigned some kind of bio monsters to our aid.
The monsters are to act as the first wave and we are to act as reinforcement coming in closely behind.

We also know that the fortification is held by some kind of super sub humans and a mechanised company from the same formation that we previously got attacked by is to reinforce them. 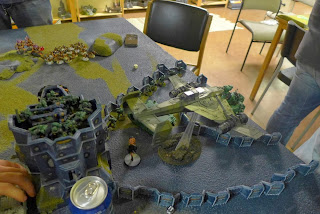 A picture taken just as my Avenger just haven past throug the first wave of AA fire and trying to take out one of the sub humans AA vehicles at the centre of the fortifications. 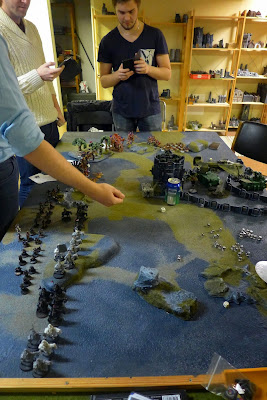 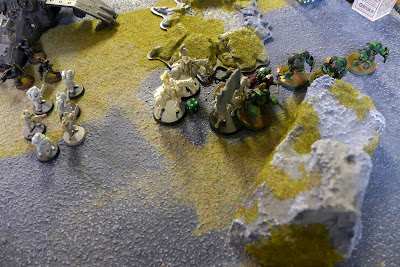 Enemy Terminators led by their company commander is making short work of our cavalry. 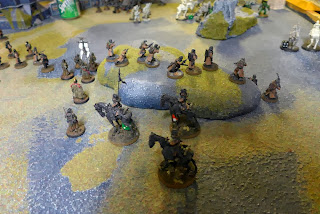 Survivors from the Terminator onslaught is redeploying where they are better needed. 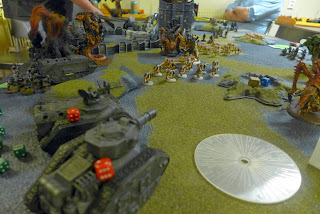 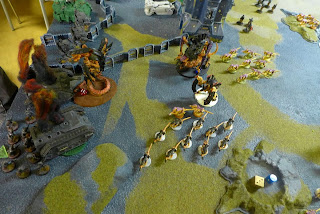 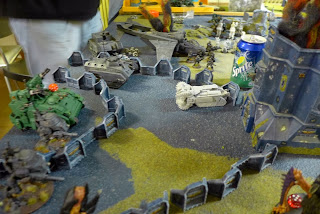 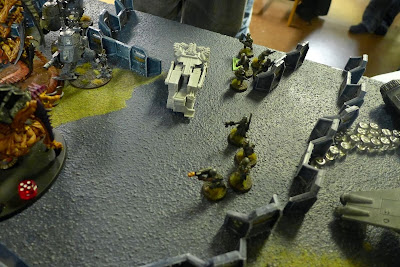 Taking its toll on enemy armour...

Aerial photo of the carnage.

But lets take a pause from that now and look at another of the tables that where used this day.

Here are some pictures of the table next to us.
An Eldar player aided by Marines was assigned some imperial PDF troops and was to hold a trench line against twice his points of Tyranids and Chaos.

This is not a pretty sight, not for the defender atleast.
But as a spectator this is a really cool looking battle field with trenches overrun, vehicles set ablaze and large monsters swarming the place.

Not a "fair fight" but as this is a campaign and not a tournament it was never intended to be a fair fight from the start. 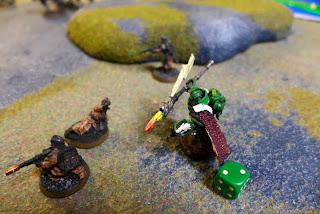 In a trade of casualties the Terminators are engaged with the D Korps...

Lets just say that even though the Terminators and their Commander did manage to take down many a Korpsmen, trading casualties for time, space and Victory is what we do best...

With his crème de la crème stuck and slowly grinded down the rest of the table was ours for the taking.