Here are the fruits of last nights paintings. Some new Work In Progress pictures of my two Macharius super heavy battletanks for my Death Korps of Krieg, 40k.

The white recognition stripe I think ads lot of character and makes for an more interesting model on the rather flat surface on the side on the tanks.
I have started to apply some red "rost protection primer" on one of the Macharius tanks, showing where the paints have been chipped of.

Still some more detail works, maybe some numbering or other marks and more mud still to do. The glass windows and the headlights need works, they are just a one colour surface at the moment.

One of the super heavies havnt got any radio antennas and I like these on the other one, so I think I have to give the other ones that to. I have thought about giving at least one of them a banner in the antennas, and my friend Tobias gave me an Napoleonic Austrian one with a double headed eagle that I think will be perfect.

So thats the new status of the super heavies after a much to late night with coffee as company.

I just love these super heavy tanks, a nice addition to my Death Korps of Krieg. 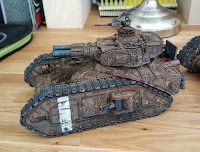 It feels like ages I played Warhammer 40k and my friend Håkan was not hard to convince to guide me into this "new" edition.
Its my favourite kind of 40k game, IG vs IG... Even the lousy guardsmen wounds the enemy on 4+... This usually means lots and lots of casualties...

We played 1500 points and after a dice roll it was decided I would be the attacker, this gave me the option to declare a "Farlone Hope" charge. An option I took. The Forlone Hope objective is represented by a Medical Servitor in this game.

Håkan is deploying his Steel Legions.

The lascannon teams have taken up firepositions in the tower and the building, a squad of Death Korps are planing to advance on the fringes of the gaming table, behind this the Command Chimera and two Griffons are seen.

A platoon command squad and a squad is planing to advance.

Enemy positions.  The Medical Servitor Forlorn Hope objective is placed in the ruins there. 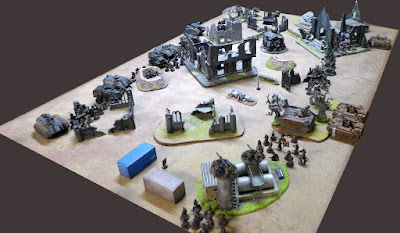 The gaming table at the start of the game.

My Griffons open up a nice hail of barrage, the unit in their way was in a world of hurt...
My Company Commanders rolled previously on the Warlord trait table and because of preliminary bombardments have lover the cover save of that terrain piece to a 5+.

The Griffons had been given Carcass ammunitions so they weren't given even that...

Death Korps advances securing one objective in its way. 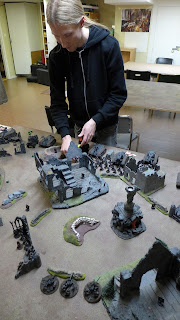 These Lascannon equiped Sentinells put a stop to my plan of advance with my Storm Chimera on this flank.

I instead advanced with infantry taking cover along the way.

Enemy Conscripts using the large ruin while they advance. This is a large and scary looking "blob" of infantry.

Enemy squad with a missile launcher has taken the high ground for fireposition.

Enemy Conscripts advance with a Demolisher tank in support.

Using the terrain as cover a Death Korp squad advance and redying their grenades.

My Griffon Mortar tanks with Carcass ammunitons makes short work of the Conscripts... Its a wonderful what three Griffons can do... 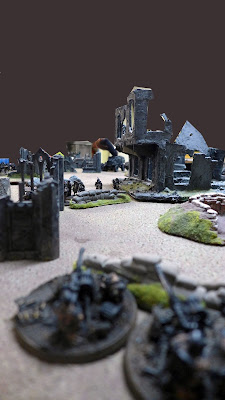 Enemy Taorox are taken out with Autocannon fire.

Another Taurox with an mounted Veteran squad, rushes forward.

My squad are trying to reach the relative safety of the large ruins when they are decimated by the veterans.

Demolisher cannon open up fire on my Comand Storm Chimera and two Griffons.

One Sentinel is taken out, the combat continues.

The Veterans spread out in fear of reprisal from my Griffons.

My Chimera pushes forward to get a better firelane, it has taken some damage from the Demolisher tank but is still holding together.

But the enemies are not taken out.

A platoon command squad take out the Taurox with its meltaguns.

The Chimera is using its Autocannon trading shots with the enemy, not feeling safe with the amount of anti tank weapons still in front of it. My Grenadiers have been holding back long enoung and decides to use their legs instead.

My Death Korps pushes forward and the Medical Servitor is soon in reach.

My heavy industrial drill named "Gluffs Gluffs" fail to hit the Leman Russ or the Chimera but is still near enough for my enemy to be calm...

My badly damaged Chimera was taken out but  the Command Squad survived and took shelter in some ruins.

A platoon command squad with two meltaguns are using the terrain to close in on the tanks, "Gluffs Gluffs" are threatening them from the other side.

Having finaly finished the last Sentinels I spread out and using the forrest to close in.

That forward pushing enemy Veteran squad is about to be taken out... Im using the Heavy flamer mounted in the nose of the Grifforn Mortar tank and a regular flamer in the process.

Grenades are wonderfull for taking out Chimeras...

One of the enemy Veterans suvives the inferno and a sometimes you just need to use the bayonets.
The Watchmaster (Sergeant) led his two soldiers into the combat and the enemy Veteran was no more.

The Hades drill is still in range but didn´t manage to take the Demolisher out, it only resulted in a weaponry loss.

The Demolisher was instead taken out by the Company Commanders meltaguns, an extremlu lucky shoot with heavy cover from long range.

Enemy Command Chimera is taken out with Griffon artillery fire.

An overview from a Storm Chimera. 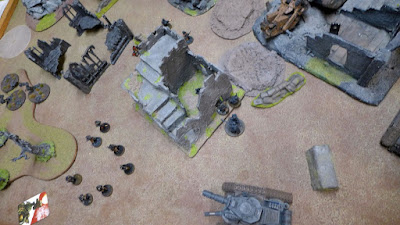 Engineers have followed the Hades drill and cleared the hight point building from enemy activity with their flamers. The Leman Russ is the next target and the Engineers and the regular Death Korps squad from the forest is readying their grenades.... 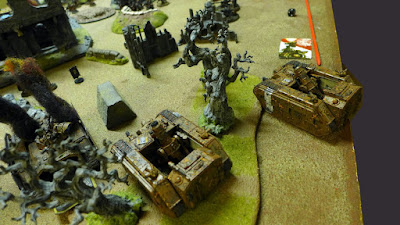 The Griffons is still raining death onto the enemy, infantry positions to target are getting are becomming an rarety.

The last Leman Russ is taken out.

All good in a days worth...


Big thanks Håkan for a terrific game. It was really nice to use the "new" objective cards that are drawn each turn, it adds another level to the game and makes it mutch more interesting.