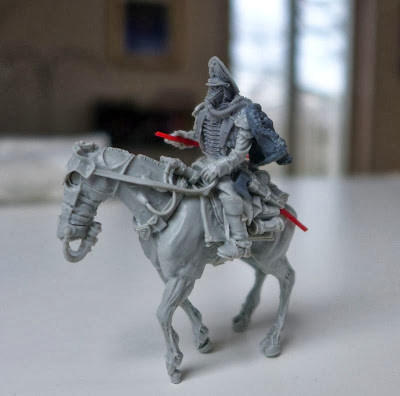 Just some work in progress on my Death Korps of Krieg army in Warhammer 40k.

I mounded one of my Commissars.

He is cut from the waist and mounted on a regular Death Korp horse. I replace his saber with an axe from my Viking bitbox. He got a riding crop under his arm and I gave him an Napoleonic Hussar jacket over one of his shoulders. Seeing that the Death Korps uniforms are more or less direct copies of French ww1 uniforms (save the sides of the helmets which look more German ww2) I thought it would only be fitting to give him a French hussar jacket. 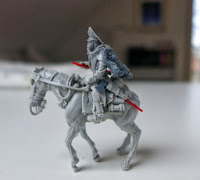 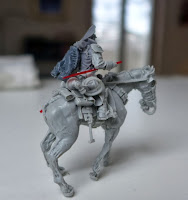 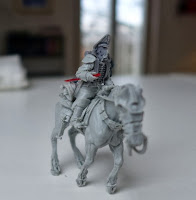 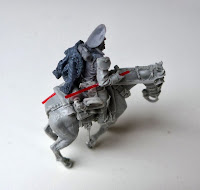 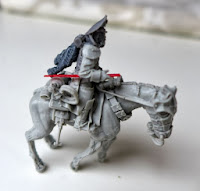 The riding crop was made from a plastic broomstick straw that was flattened in one end with a plier.
Im not totally convinced about the hussar jacket, maybe that’s a little over the top and I might remove it. But at the same time it won’t get any dandier then a hussar jacket.

I just painted these miniatures.

They are intended to act as the enemies of my coming Saracens for the Crusader project. The plan was to use them as a small group of Latin medium infantry in mixed formation.

I painted them in blue and white because I wanted them to be rather generic and thus could be used for my “put on hold” medieval Scandinavian project. The commander was based on a round base instead to be easily identified but still in the same style as the others. His heraldic or colors are also painted rather generic to able him to fit into different types of games.

All of the miniatures are single based to allow skirmish type of games, with a movement tray this will be no problem for larger types of games. 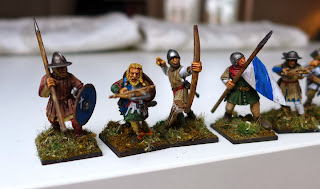 Starting with the spearmen to the left, its a Fireforge Game Foot Seargent with a plastic roundshield from Gripping Beast plastic Dark age warrior kit.
The bearded crossbowman is a Fireforge miniature with the head from Gripping beast Dark age warriors.
The archer is a Fireforge miniature with arms, bow and arrows from an old plastic GW Bretonnian archer.
Next in line is the spearmen, he is the same Bretonnian archer but with arms, spear and shield from Fireforge. 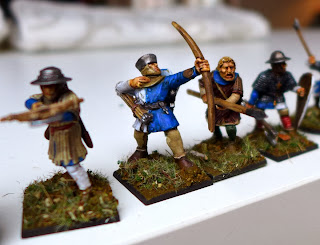 The crossbowman is all from Fireforge.

The archer is a old Bretonnian with a Fireforge head.
The spearman is from Fireforge but with his bearded head from Gripping beast Dark age warrior. 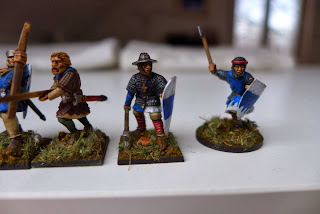 The axeman with the cross is from Gripping Beast plastic Saxon Theng box but with a head and shield from the Fireforge box. I wanted the cross on a crusader infantry. 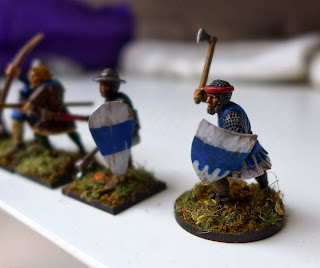 Lastly their commander, he is a Fireforge miniature but with the head from one of their heavy infantry boxes, his arms are from Gripping Beast and I think it was from the Saxon Theng but it could have been the Viking Hirdmen box. 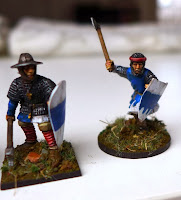 With some extra roundshields and some harry faces this is a rather character full group. So I can highly recomend the Fireforge games kits. And by adding some bits from other makers like roundshields and such you end up with a great collection that was really funny to put together. 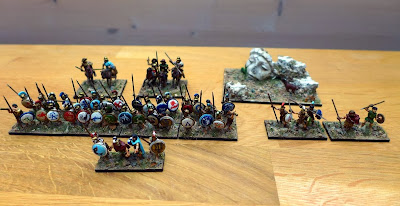 I needed to clear up some halfpainted projects to make room for new ones.
One of those projects that’s taking up shelf space is this DBA force and it feels really good to have given them the paint the rightly deserved. They have waited for far to long to be finished.

Some of you might remember this guy, a test miniature I did from the force. Its nice to have his buddies joining up. 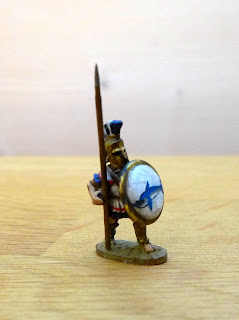 There is something special with those hoplite formations and I always wanted a force of them.
The miniatures are 15mm from Xyston if I remember correctly and are superb.

It took some time to get all those hand painted shields ready but they look good all painted up don’t they? 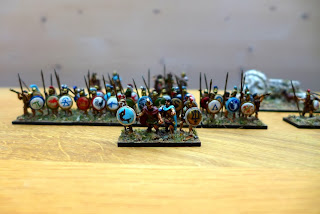 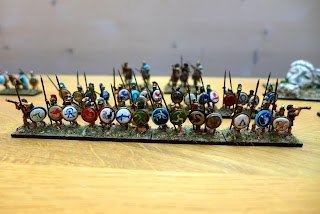 The camp is represented by a large face on an statue (from Scibor miniatures) and the last feta cheese producing 15mm goat from my bitbox I had left.
So the real question, is it the goat or the large stone face that is so important with this camp that’s it worth defending? 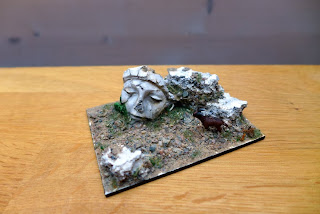