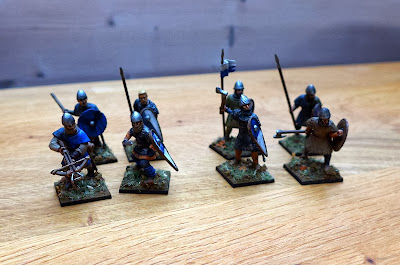 My little venture into the Middle Ages continues in the form of some infantry. I used the plastic Norman infantry box from Conquest Games as a base for these.

I based them individually so I can use them for skirmish games if I want to.
As with the cavalry I painted these with blue and white as the main colors as I wanted them to be used as soldiers belonging to the House of Eric. 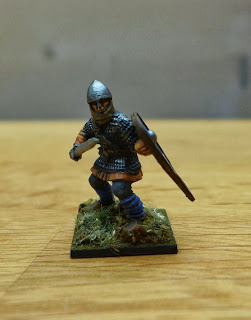 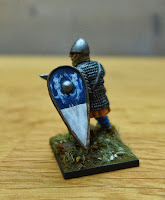 I wanted to test something out, this one is a plastic Hirdman from Gripping beast with a new head and a different shield. I am very pleased with this kitbashing and it shows lots of potential. My little test was a great success if I may say so myself. 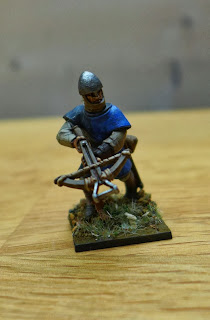 This guy got a crossbow from some Warhammer Mordheim kit. You can’t have Swedish middle ages without crossbows. Simple but effective conversion. 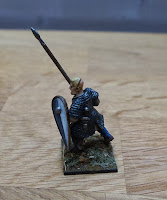 
Battle of Lena, from the movie Arn 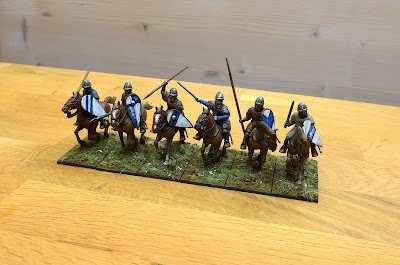 It was actually after I talked with my friend Peter and he revealed his latest shopping list of miniatures that I started to glue these together. The very same evening that he told me he had just ordered a plastic box of Conquest Games Norman Infantry and that he had a plan to paint them up as Danes that I opened up a drawer with some left over miniatures from some conversions and kit bashings from my Viking project.

I have for some time now thought about gaming medieval Sweden or Scandinavia and one plan was to hav the conflicts between the Swedish families of Sverkar  and Erikar as the main theme and used in the battles of Älgarås1205  , battle of Lena 1208  and the battle of Gestilren 1210.


Any one seen the Swedish movie about Arn should get quick idea of what Im after, well except that crusading looking fellow, the main character in that movie of course.

I have thought about getting those promising looking plastic boxes from Fireforge games but I think that these battles could be a little too early on for those miniatures. I might have to rethink my setting for the miniatures if I should get some. But as Im far from an expert in this era I could be wrong.
Im not sure what years Firefirge Games miniatures are meant for.

Anyway, when my friend Peter told me he had just ordered some plastic miniatures and plan to paint them as Danes I thought that as I already had some of those miniatures at home I could paint them as Swedes and battle his miniatures.
I started to assemble a small force and had even primed them before I went to bed that night. Here are the first miniatures from this little adventure. 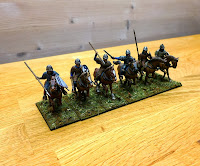 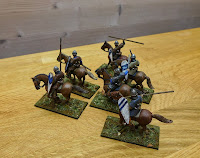 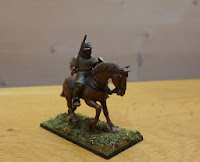 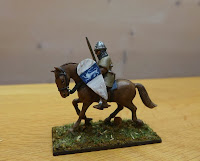 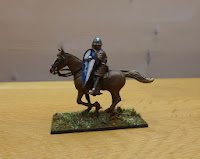 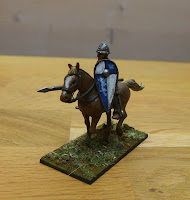 They are meant to look as sort of light or medium cavalry so I tried to keep the gear as simple as I could.
I went with the colors blue and white so I could use these as soldiers from the house of Eric but in the same time giving me the option to be rather generic if I find another theme or way to use them. I based the miniatures singly so I have the option to use them in skirmish games.

War in the desert - Flames of war AAR 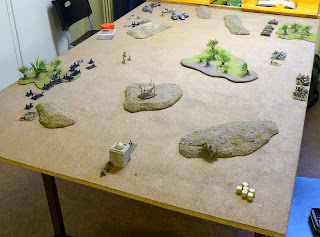 My friend Tobias and I played two Flames of War games last Saturday and here are a small aar of one of the games.

(wrong tactical numbering for an Pz IV, I know.)

With only half our forces deployed at the start of battle and I got a clear sight of the dreaded Sherman platoon (those are some nasty tanks in midwar).

I knew I wanted to try to take them out early, so the 88s was deployed to handle them as well as the Pz III to try to outflank and close in on them with my shorter cannon range.

Things started good with the 88s destroying two of the Shermans and bailing a third.
My Pz III didn´t do squat but the Messerschmitt nailed one Sherman.

The concentration of firepower against one unit started really good with only one Sherman left in that unit and he was bailed out.

I was allowed one reinforcement and chose the Pz II unit as I intended these for anti infantry duty and thought to keep the Pz IV off board until I knew where his next Sherman platoon would arrive so I could counter it.

The Pz III and my Second in command with his Pz IV have taken up fire positions behind a small ridge.
And opened up fire against the surviving Sherman that managed his bail out test and had moved backwards and taken cover next to his 2iC and one objective.

This resulted in a very strange happening, with four hits from my tanks he rolled four 2s resulting in a lot of bailed out results because of the range (6armour+1 for range +2 for the dice against my at9). And as he was rated as “confident” surly he would have to fail atleast one of the test and leave the battle…
No, not a chance… He managed to keep calm and remained on the battlefield.

Meanwhile on the other side of the table the Pz II platoon and my Commander in his Pz IV tank raced between covers to not give his 37mm gun any targets as I closed in on the objective and the enemy platoon guarding it.

In an attempt to get a clear side shot on the last Sherman my 2iC had ventured a little too far and when his reinforcements of four brand new Shermans arrived they could see no better target then my lone Pz IV tank…
At least I managed to take out that lone Sherman.

With an combined fire from my 88s, my Pz II and my commanders Pz IV I managed to take out the 37mm gun and the bazooka teams as well as inflicting some casualties on the American grunts to.

After the anti tank gun threats was neutralized I closed in and with gunz blazing I assaulted and routed the infantry.

This put me on top of the objectives but I knew I was to expect a enemy reinforcement before this game was over.

Now happened what I only could describe as a Napoleonic tactics… Arranging the troops in a sort of fireline. Oh well Flames of war is just a game, with some ww2 toys in it.

The infantry reinforcement did arrive but didn´t do enough damages to push me from the objective. 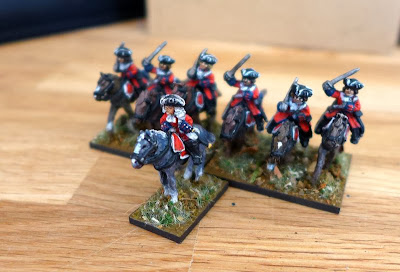 These were fun to paint.

They are painted to represent the Danish Bülows Dragoon regiment from the Great Northern War. 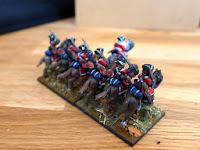