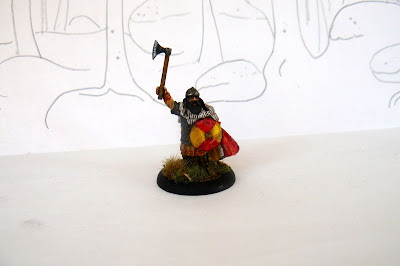 
As I mentioned in a previus post on Saint Sigfrid http://kampgruppe-engel.blogspot.se/2012/12/saint-sigfrid-unaman-sunaman-and-vinaman.html , Gunnar Gröpe was a person I really wanted to include in this project.
Gunnar Gröpe was a real person during the age of Vikings but some legends would make him particularly good for this… Beheading trolls and turning into a werewolf…

The miniature are from Gripping Beast. I chose to go with red and yellow as the main colors as this is the colors in the coat of arms of the Trolle family.

While Saint Sigfrid served in Västergötland, his three nephews Unaman, Sunaman and Vinaman worked further in Värend, and with their small wooden church in Växjö.
But the precious liturgical vessels aroused a few newly converts greed, and under the leadership of a man named Gunnar Gröpe they dragged the three monks into the forest at night where they beheaded them.
The three heads where put in a wooden tub in which they tied a stone which is then lowered into Helgasjön just south of the church. Their bodies were hidden under a pile of stones.
The Sigfrid Legend has it that on that flapped and squawked a flock of ravens and overnight and a brightly light was seen from the stone pile. The murderers then decided to hide the bodies away somewhere else, in a place "that God alone knows" that the legend says.

Then Bishop Sigfrid and King Olof had heard that happened down in Småland, Sigfrid praising God that He had let the three monks die as martyrs and decided to head south to retrieve the bodies. The king promised to later follow into Värend, and wanted to send a larger punitive expedition, but the bishop advised him not to do so. One night when Sigfrid walked along the lake, the legend says, he saw a flash of light in the water. He took off his shoes and waded out into the water, and found the tub with three severed heads, which he placed in the church. Shortly after arriving King Olof captured  the murderers who were sentenced to death. The judges, however, converted to fines, and they were pardoned on Sigfrid's request

From the Swedish Wikipedia page on Gunnar Gröpe


Gunnar Gröpe lived in the tradition of the 900 - or 1000-century Värend. According to tradition, he was known to be cruel ("gröp") and should have stated the värendsbor who murdered missionary Sigfrid three nephews Unaman, Sunaman and Vinaman around the year 1000. He will for the deed have been displaced from Värend of King Olaf and took refuge in the Tving in Blekinge. At the cemetery in Tving is a stone, which is considered a memorial of Gröpe.
According to another tradition, Gunnar Gröpe ancestor of the noble family Trolle. He is said to have struck the head of a troll, and after this feat dynasty took its name.

From Tvings church in Blekinge County

North of the church, on the part of the cemetery, that first in recent times have become a cemetery, there is a stone that is considered to be a memorial to the Gunnar Gröpe, which, according to legend, killed St. Sigfrid's aides Unaman, Sunaman and Vinaman in Växjö. He had for the deed have been displaced from Värend of King Olaf and have taken refuge in the clamp, then Danish area, where he was buried in the heath soil.

From the Trollenäs Castle in Scania County, southern part of what is now Sweden I found the following.

According to ancient legends is the lineage progenitor Trolle the evil heathen Gunnar Gröpe (Gröpe = cruel) who lived in the 900's.
They said that at night he turned into a werewolf. Grits were in constant feud with the troll Skratte that he finally managed to chop your head off. Hence the noble families name and coat of arms with a headless troll in the shield. On Trollenäs castle both Gröpe and troll Skratte should have been reborn in various guises over the centuries. Gröpe usually takes the shape of a large black dog with bright eyes, usually the dog turns out in the basement of the castle.

Trollenäs castle have been in the position of both the noble families of Trolle and Thot. But Im guessing that before this castle was built in the middle ages there were some other form of settlement here. Maybe Gunnar lived here for some time.

So with this little history lesson and legends we got a heathen Viking chief that is especially cruel, he murders monks, beheaded a troll and some say he even can turn into a werewolf. As you might have guess he is perfect for this little project. Mixing history with legends, Vikings with monsters.

Thanks every one that actually took the time to read all that as it took me some time to write.