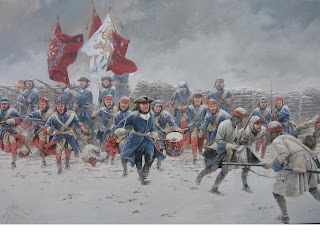 When I started my Great Northern war I chose the 15mm scale. This project was never intended to be a main project but rather something that would always be in the rear, something in between other projects.
I needed Swedish troops and someone to battle against, and instead of choosing the more common Russian troops I chose Denmark.
Many years ago I played a demo game of “ Gå På ” in Lincon here in Sweden. I got the rulebook but nothing more happened.

Sometime this spring I think, something made me get interesting in the whole thing of Caroleans and the Great Northern war again and I bought some miniatures and the new edition of the rules, and now I think it’s about time to show off some of the models I have painted since then. My hope is that these posts will inspire me to pick up the project again and start painting some Swedish and Danish troops.
If I will use the Gå På rules or the Black Powder rules I haven’t decided yet but I will base the miniatures according to Gå På and then I could use it to either one of them.
The Danish troops are bought at Black hat miniatures
http://www.blackhat.co.uk/online_shop/index.php?cPath=22_161&osCsid=e926a01a00ecb1e355d85293ff5823a0