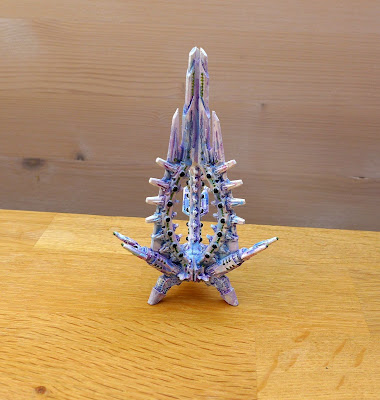 I had this model for over a year and have had real difficulties to decide on how to paint it. I finally settle down with keeping the overall whitish coral effect on the entire model but painting the larger "gems" on the structure as the same glass canopy of the other vehicle instead of the green gems I usually gives them. This gives the effect of multiple eyes in every direction that I think looks cool on this alien construct. 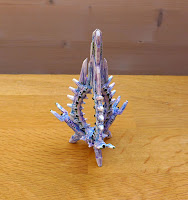 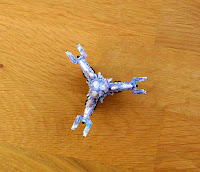 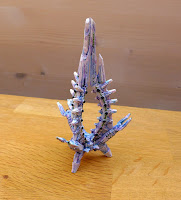 The Totem is a particularly unusual unit, even for the Shaltari! It has a crew of one Shaltari, who sits within an armoured chamber at the base of the construct. A Warspire is essentially a towering, immobile emplacement. The Totem's primary function is to protect a building by projecting an all-encompassing energy shield over the entire structure. This Passive Countermeasures system increases the survivability of the building, allowing Shaltari troops inside to carry out their mission with a diminished chance of having the building demolished on top of them!
This is not, however, the Totem's only role - it can also focus its vast energy reserves into wild bursts of power, shattering armour and melting flesh. This gives the Totem a deadly (albeit fairly short-ranged) offensive capability. This can be particularly useful to Shaltari commanders late in the battle, when its primary role has been fulfilled.

The Totem also has the rare ability of being able to unleash one of these systems immediately after being Materialised from a Gate (or before Dematerialising - but not both!). This snake-like ability to strike instantly is granted by the Totem's vast power generator and its lack of mobility, since all this raw power can be channelled to weapons.


And here you can find some comparison pictures with the smaller tanks I painted previously. This thing is rather big.