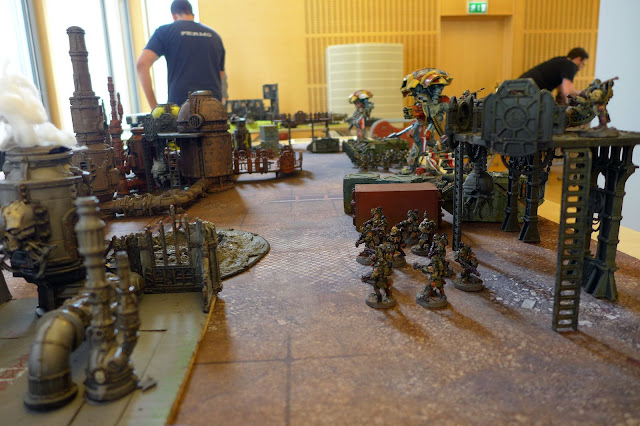 This is the fifth and final AAR from Ajax 2, an Horus Heresy event.
It was some time now since the game so I will make this AAR a rather short one.

My Solar Auxilia with its Druzina knight support would be facing none other then Magnus the red him self, with his elite psychic terminators as well as a massive Warhound Titan.

The scenario meant that the ground was really unstable and with a dice roll at the beginning of each of the players turn the opposing force could be facing an explosion, as well as on another gaming table.
We would be able to drop explosions on other players games... :D

I deployed my force first rather evenly spread over my deployment zone as I was rather afraid of his large strength D blasts that would be raining down on my forces. As I was somewhat lacking on the anti tank weaponry and would have to get close to the Titan with my knights to really hurt it.

My opponent boxed in his Warhound Titan in a corner and had Magnus, and the rest of his force protecting it from any of my forces that would trying to get near it.

I was really hoping for my Medusas in this game as my opponents had so many elite terminators and thats what the Medusa usually shines...
But I had not counted on Magnus, his psychic terminators and all the biomancy of the Thousands Sons...
Even with with St 10 Ap2 the enemy terminators with T7 4++ save and with 4+ Feel no pain was almost laughing at my heaviest firepower...

And I started to more focus on the phase where I was able to drop templates on other players games instead. It really felt that my army was not up for this.

The Warhound continued to blast my army apart and Magnus and the terminators took all the firepower my army could throw at it.

I was not able to get enough objectives, kill his warlord or the Titan to really do any real damage. And in the end I had lots of depleted units and burning wreckages on my side.

It was a loss for the Loyalist. 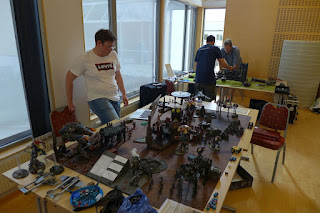 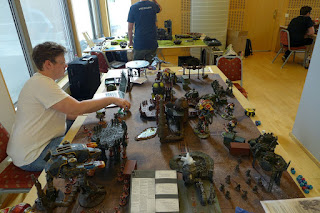 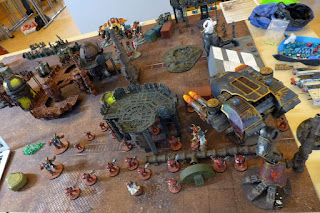 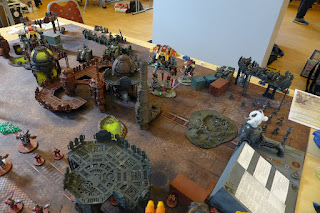 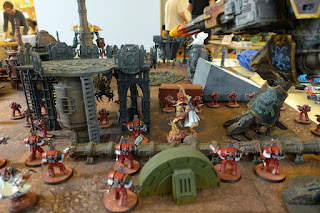 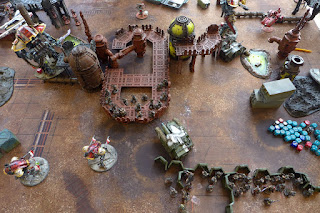 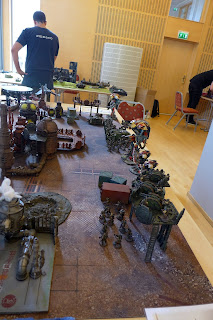 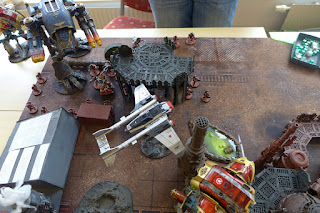 This was the last game of the event and I had have lots of fun playing. And it was really fun to try out Questoris knights for the first turn. As I had painted them and the flyers especially for this event, more because I wanted them painted then that I thought they would be the best option. But in the end I was really happy with my list.
It was nice to feel that I had some punch for a change, with the Knights. And not only the slowly chipping away on the enemy force that I usually have as a plan or tactics.

I felt that I had a little of everything in my list.
I lacked something but felt I could compensate for those things. With mixture of wins and losses I felt that my army was nether to powerful or to week and rather balanced for what I was facing.
I think it will be some times till I will be fielding Knights again but know I know how they work and have learned a lot about their rules so this was a really good experience.

Thanks all that attended the event and all the organisers, I had a blast. 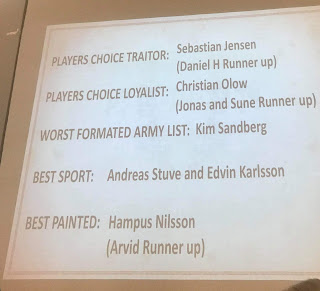 And I managed to get an honorable mention as the runner up on the players choice Loyalist. 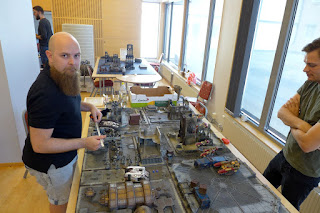 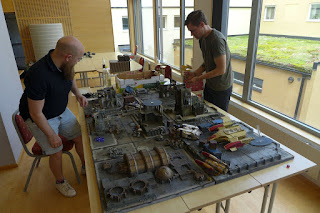 My Background and army pictures for my army in the Ajax sector can be found here:
http://kampgruppe-engel.blogspot.com/2019/07/solar-auxilia-army-picture-for-ajax-ii.html