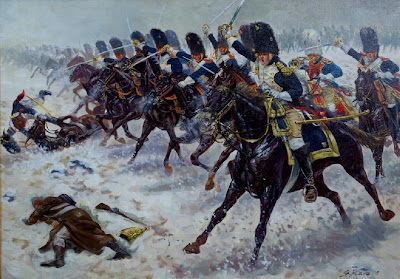 I just painted  the last things on a unit of mounted grenadiers. They have been half painted in my ”half painted drawer” for at least half a year.

The uniform and the black horses make a striking contrast. I really liked the blue and white uniforms with gold against the black mount.

The miniatures are Perrys plastic Dragoons but there all dressed in bearskin and painted to look as Grenadiers a Cheval instead. I know that the haversacks are wrong but I’m no “button counter” when it comes to Napoleonic’s, its good enough for me.

The banner is from Victrix foot grenadiers, again good enough.

The pictures looks alitle blury, I gueass its because of the bad light.